With poignant and thought provoking lyrics, Amy McCarley finds balance in a new perspective with MECO, her 3rd studio album due out February 8, 2019. After collaborating in writing new songs with Bluebird Cafe round-mate and Nashville Songwriters Hall of Famer, Pat Alger, McCarley returned to the studio with esteemed colleagues, co-producers Kenny Vaughan & George Bradfute to work on MECO, her highly anticipated follow up to 2014’s Jet Engines. MECO was recorded and mixed by Bradfute in his Tone Chaparral Studios in Madison, Tennessee and mastered by Jim DeMain at Yes Master Studios in Nashville.

A rhythm section all in himself, multi-instrumentalist Chris Scruggs lent his talents not only on drums, percussion, and bass, but also steel guitar. Alongside special guests Marty Stuart, Pat Alger, Kenny Lovelace, and Harry Stinson — the future is bright for fans of Amy McCarley.

Uniquely relatable, this northern Alabama native’s music is embraced by Americana fans across the country and abroad. Vaughan says, “I think all of her songs come from a personal experience. Each song is about something she’s gone through, which is good because it gives her a little edge on the delivery. The emotional content kinda comes through in there.”

MECO, an acronym borrowed from the Space Shuttle program that stands for Main Engine Cut Off, occurred for the shuttle when onboard propulsion systems were disengaged at an altitude where velocity could be maintained by the power of an innate force at work in the universe with periodic adjustments from the vehicle. The album traces McCarley’s experience of what it’s been like leaving life as a NASA contractor to pursue a career in music.

McCarley explains the inspiration behind the album, “Similar to shuttle missions, the trajectory of my path has been defined by how well I have been able to develop personal strength as an artist to the point where the possibility of connecting with the enormous collaborative power of other worldly talent exists. It has taken everything I have plus the guiding unseen hands of time and chance together with support from some incredibly talented generous souls in order for this album to be made and on its way to listeners.”

She says in an interview with Wide Open Country, “It’s taught me to be grateful for every opportunity and all the talented people I’ve had the good fortune to work with on this project. It’s taught me to do my best and then let go of the need for the outcome to be a certain way. Of course, that doesn’t mean I don’t forget and need to relearn all this over and over. I’ve certainly not graduated from the school of life!”

Her sultry voice was lauded by No Depression as “a nuanced instrument” and her drive and determination to continue charging forward is readily apparent on MECO with a blazing backing band to accent in instrumentation what her emotion filled vocals bring forth in each song.

This is McCarley’s second album working with Vaughan (Marty Stuart & His Fabulous Superlatives, The Pretenders, Lana Del Rey, et al) and Bradfute (Webb Wilder, Planet Rockers, et al) at the helm since she left the NASA contracting world in 2013. Both also accompany her in performance on MECO, with Vaughan taking the lead on electric and playing acoustic guitar on the entire album and Bradfute performing on slide guitar, fiddle, mandolin, and other strings.

McCarley says, “What Kenny brings to this whole project as producer and lead guitarist cannot be overstated. Together with a stellar assembled cast —including mighty partner in crime, co-producer / engineer / studio owner, George Bradfute— his influence and signature sound took this album to a place I never would have known to go on my own that I feel so fortunate to be able to share with the world.”

The ten tracks of all original material feature McCarley’s yearning vocals, acoustic guitar, and harmonica. Alger, who co-wrote half of the songs on MECO says of McCarley, “Super, super intense guitar style. And I was so fascinated by it. Everything she did was real. Super intense. She’s just a different kind of performer.”

Throughout the album there are songs of determination and revelation (“A Clue”), perseverance after despair (“Clarksdale Blues”), and cathartic release in a new perspective (“Everything Changed,” “Happy,” “Farewell Paradise”). There are melodies of joyful triumph (“High Wire”), gratitude (”Days”), and a song about finding meaning amidst uncertainty (“Never Can Tell”). Some are plaintive in nature (“How You Do,”)  while others are breezy lighthearted observations on universal topics (“Ain’t Life Funny”). 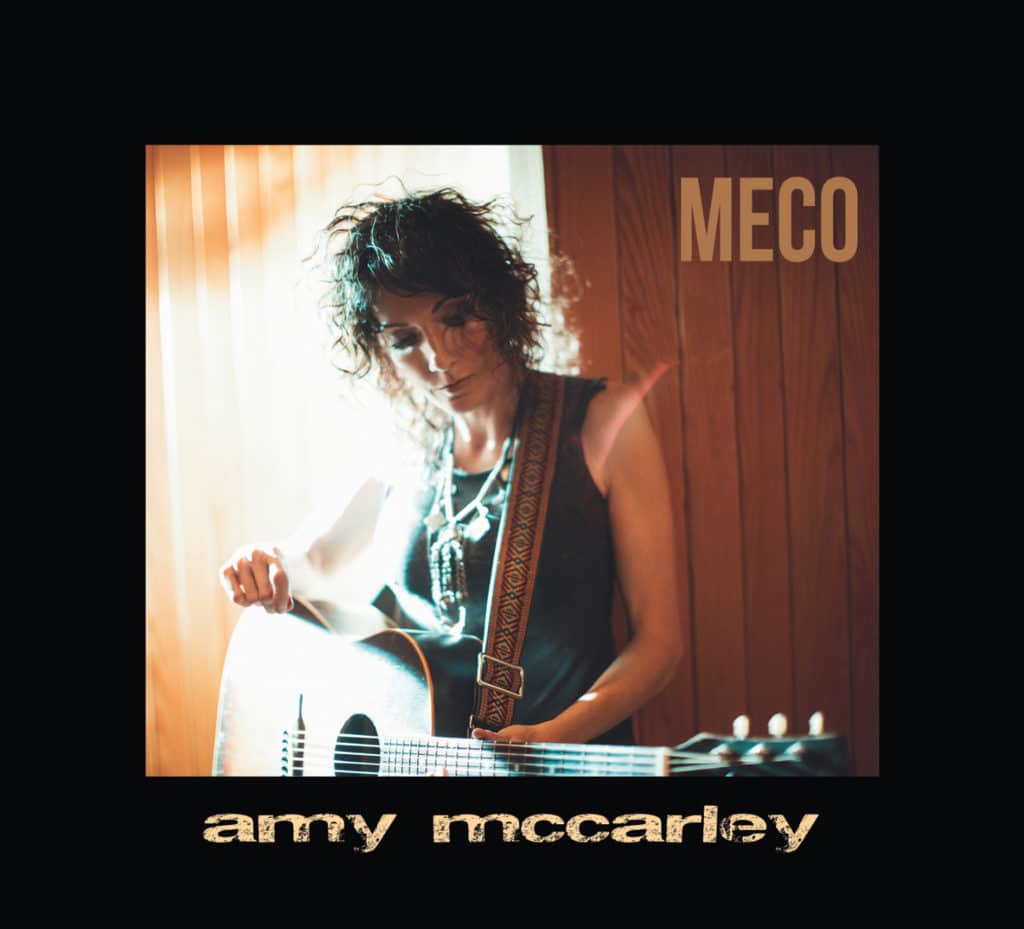