Balsam Range’s assent to the top of the Bluegrass world has left a well marked trail of success since the band’s inception in 2007. One of the genre’s most award winning artists in recent years garnering ten International Bluegrass Music Association Awards to date with five critically acclaimed albums, Balsam Range has put on live performances across the nation, including multiple Grand Old Opry appearances that have left audiences spellbound. Nominated for three International Bluegrass Music Association (IBMA) Awards (Entertainer, Vocal Group, and Vocalist of the Year) for 2016, Balsam Range is offering something that is sure to continue to mesmerize fans of Bluegrass and beyond with their new release Mountain Voodoo, due out November 11 on Mountain Home.

Mountain Voodoo is like the book of life “Chapter Six” for Balsam Range; 13-tracks filled with songs of journey, home, sense of place, hardcore stomping drive, and longing. There are fiery instrumental parts alternating with heavy, deep ballads overlaid by the vocal harmonies the group has become known for.

Picturing the story of Mountain Voodoo…
Imagine yourself, if you can, high up on a ridge in the mountains of North Carolina at midnight under a full moon, looking through the smoky nighttime haze at the surrounding ridges all covered in Balsam firs. It’s a scene of life engulfed in strong but muted tones, crisp air, bubbling springs, and the power of uncertain mystery. The springs carry the mystery down and down, feeding the the creeks and streams that feed the ponds and the small farms, and the small towns and the people in them, and the works they create by day.

Then, somehow imagine that there is a soundtrack to all this – to all the old tales, lives lived, and even the scenery itself. It sounds like adventure glimpsing into the unknown, but remembering family and friends and always wanting to return home. Yes, there’s a dualistic nature about it, but the story always finishes with the pull of the mountains, the people and the places.

This environment, this background and this living culture is the backdrop that chooses the songs and creates the rhythms and styles, that voices the vocals and fingers the strings, that casts acoustic spells on every audience every time. When Balsam Range performs, a joyous magical mysterious musical mist enchants the audience as well as the band. Buddy, Caleb, Darren, Marc, and Tim become the messengers and the crowd is transported to that place. This is what is Balsam Range—this is Mountain Voodoo.

The mystical deep jam of “Voodoo Doll” is a fun creative twist on the age-old tale of broken hearted love loss and the attempt of passing one’s heartache off on mystical curses rather than accepting reality.  Written by Jeb Anderson many years ago, the band has wanted to record it for a long time, after Melton first heard it performed by a dear friend and fellow artist known as “Tall Paul”. It is not your typical bluegrass song; It could just as easily be performed by a rock band.

There are multiple songs written by Balsam Range “staff writer” Milan Miller, including the catchy opening track, “Something ‘Bout That Suitcase,” which Miller penned along with Beth Husband. Buddy Melton, a longtime fan of lyrics that make you think, and IBMA Vocalist of the Year nominee for 2016, asks, “How many times have you seen a stranger traveling through life and wondered, what is their story? Where are they going? What has brought them to this place? We all have and it’s that curiosity and interest in other people that brings society together. Maybe it’s the human inherent caring spirit that defines us most or at least gives us hope for humanity. ‘Suitcase’ is a song we can all relate to and one that will at least have you looking around the airport terminal with curiosity the next time you fly the friendly skies.”

“Blue Collar Dreams” is a working class anthem, written by Aaron Bibelhauser, it had all the elements for Balsam Range to transform it into a great bluegrass song to comfort the frustrations of working for the hard-to-attain American Dream. From the first note of the mandolin kick off you realize quickly that things are going to get tense but in a good way.

“Eldorado Blue” is a story of finding oneself and recognizing contentment in life is something we can all stand to do; whether it means moving away or staying in what may seem an unlikely location to achieve it, is a blessing. “The Girl From The Highlands” is another journey song inspired by Miller’s travels through the Highlands years ago and the stories of many Scottish Highlanders who traveled to the US for work but often couldn’t afford to bring family along. Balsam Range spices it up with Tony Rice styled vocals and Caleb’s guitar licks which capture that same vibe and groove.

Mountain Voodoo is thematic of life in Western North Carolina, from the haunting and lonesome “I Hear the Mountains”, to the Honky Tonk of “Hello Heartache,” to the rip-roaring banjo led “Chain Gang Blues,” to the sacred and soothing “Rise and Shine,” and Gospel inspired and powerful “Wish You Were Here.”

Balsam Range fills the air with traditional, yet contemporary sounds, things that are new, yet still somehow familiar. Mountain Voodoo is a follow up to the band’s fifth album, Five (2014), which made its Billboard Chart debut at #4 and remained on the Billboard chart for 12 weeks. The album excelled on the Bluegrass Unlimited National Airplay Album Chart, spending 5 consecutive months at #1 with seven #1 songs, earning the group the 2015 IBMA Awards for Vocal Group of the Year and Song of the Year for “Moon Over Memphis.”

Elements of jazz, country, gospel, swing, and old-time music are all infused into the fresh sound of this unique Southern band. It’s five distinct personalities creating one remarkable musical experience. It’s the award-winning Balsam Range and they are excited to bring Mountain Voodoo to the world this year. 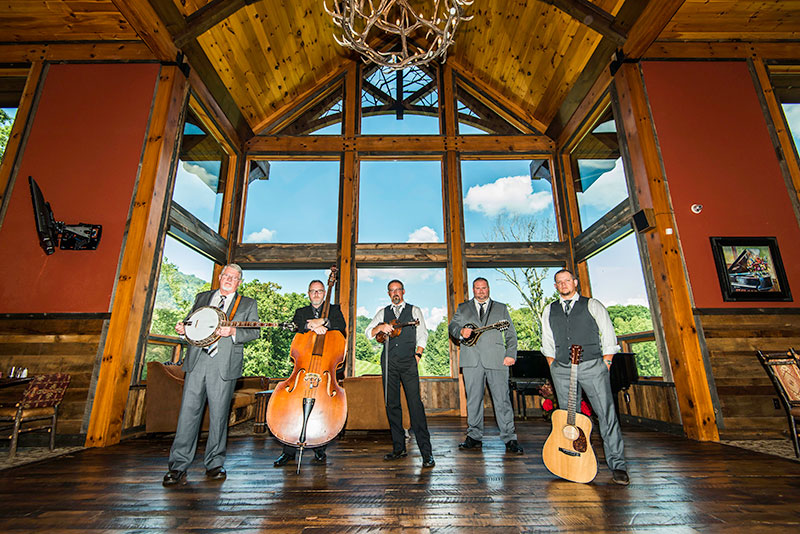