“Virtually unmatched energy and enthusiasm, underpinned by intelligent songs that don’t skimp on the infectiousness… The musicianship is smart and skilled, but still playful and groove savvy” —Saving Country Music

“The Carter Family for the millennial generation” —The Boston Globe

Brooklyn, NY — Acoustic Americana trio fed on bluegrass, roots rock, old time, and vintage swing, Damn Tall Buildings are excited to release their 3rd album, Sleeping Dogs, on September 9. Whether sharing lead vocals and instrumental solos or blending their voices into loose, joyous harmony, the three members of Damn Tall Buildings—multi-instrumentalist and primary lyricist Max Capistran (guitar and banjo), bassist Sasha Dubyk, and fiddler Avery Ballotta—delight in entertaining. Sleeping Dogs is a sensory treat that will have you smiling, dancing, and singing along.

Witty and engaging, Damn Tall Buildings’ energizing music finds beauty and glory in the mundane workaday struggle of everyday life: time keeps passing and the seasons come and go, you scroll too much, you smoke too much, you lose yourself, only to sit with yourself and find yourself again, you laugh with your friends, and you look out the window and dream about what else might be out there. It all keeps coming around. You carry on, intent on flourishing and thriving. This is what Damn Tall Buildings sings about, what they seek to share with their audience.

Damn Tall Building says, “Our innate desire is to connect with people on a level that’s beyond day-to-day interaction. Our hope is that the joy that making this music brings us will somehow get passed along to the people listening, which they can then take with them to pass along to someone else. It’s a shared celebration of positive energy, and that’s what keeps us cooking.”

Sleeping Dogs is a bop about looking things smack-dab-right-in-the-face and is essentially about how it has become almost impossible to not be constantly influenced by current events, media, and all of the other things that surround you in your day-to-day life. “Snow Crash” by Neal Sephenson—a bizarre, mind-altering romp through the infocalypse— is high on the band’s reading list. Damn Tall Buildings says, “The impact that things outside ourselves have on us, specifically, the rise of social media and all that comes with it, leads to an exponential increase of people’s awareness of other people’s lives, and how that affects them and how they feel about their life.”

The album opens with, “What A Nice Life,” which has some extra pep to balance out the darker “I-don’t-know-who-I-am-anymore” lyrics: “And it’s been feeling mighty lonesome now that winter’s coming on… Not sure who I’ve been lately… But holy sh*t can barely stand me.” This is followed by an old timey, swingin’ “Dark Window Panes,” in which they ponder a pending apocalypse, accompanied by longtime friend and maestro of sound Garrett Eaton [Dana Williams, Gracie and Rachel] on trumpet.

Max says, “We are all pretty hip when it comes to what’s happening out there in the world, and you can be sure that it finds its way into the art and music that we’ve been making. ‘Podcast” is definitely about the end of the world. A nice funk to it. Some sticky icky guitar picking. A little fiddle chuck. Bass thump. It all feels like it’s going south for sure, but we are groovin’ to it.”

Damn Tall Building is joined by mandolin wizard Dylan McCarthy (a longtime DTB collaborator and 2019 Rockygrass Mandolin Champion) and rock-steady drummer Micah Cowher [STOMP in NYC] for the velvety and rejuvenating “Cold Rain.” Micah also lays down the beat on the catchy “Sweet Girl,” with its chorus, “I am not myself, I am everyone else,” which became what the band calls, “the motto for the record; It’s basically our new anthem.”

Damn Tall Buildings calls Sleeping Dogs, “an exploration to the depths of oneself to discover who we truly are… maybe it really is as simple as buying some new shoes, and feeling really good wearing ‘em, while you cruise down the block on the sunny side of the street.” You can hear this cheery sentiment echoed in the deep groove and colorful melodies of “Lemons,” in which the virtuosic flute playing of Anh Phung [Twisted Pine] elevates the song to a new level. This fresh energy can also be felt as the sunshine slips in on “Patio.”

The mid-tempo shuffle “Painter” illustrates a re-emergence into the world, with a regained sense of self with its lyrics—“But I’ve got some new shoes baby, and I’m feeling so fine… And it looks like we’ve got blue skies honey, coming up a’ down the line.” Lars Thorson [Kane Brown], an adjunct member of DTB since the beginning, brings the magic of the lap steel to this track.

They slow things down a bit in an ode to waiting, “Quietly Heartbreaking,” written on a beautiful rainy day, and the gentle “My Baby.” Avery wrote “My Baby” for his partner in both life and music (and soon-to-be-wife), Emily Gervaise Moran [Aurora Birch]; to hear her guitar sing over the bridge really brings everything full circle in sound and spirit.

The album closes out with the title track, “Sleeping Dogs,” pulling from the old proverb—“Don’t you let them sleeping dogs lie”—the song emphasizes the theme of the album: don’t ignore life, get out there and live it, take pleasure and meaning from the little things that keep us all connected and growing.

Damn Tall Buildings produced and recorded the record themselves, back and forth between Sasha’s parents house in the south Jersey shore and in Max and Sasha’s apartment in Crown Heights, Brooklyn. They used a Universal Audio Apollo x4, Logic, and an Audio Technica 4050 microphone. After recording, they sent their tracks to Dan Cardinal [Darlingside, Lula Wiles, Josh Ritter] at Dimension Sound Studios in Jamaica Plain, MA to mix and master. Dan also played keyboard on the title track, adding to the texture of the song.

Max says, “With us taking the recording process into our own hands, we were able to set our studio up wherever we saw fit, which completely changed the recording process for us. Typically we spend a week straight in the studio doing 10-hour sessions, which is an amazing experience in its own way, but with this new arrangement we were able to really take our time, which gave us more freedom to really explore the songs without the pressure of running out of studio days.

“We all love the beach, the ocean and surfing, and are fortunate to have family with a home near the beach in New Jersey. We set up shop at the house smack-dab in the middle of hurricane season in the northeast, so we were literally doing takes, then running out to the beach to catch some of the finest waves New Jersey has to offer. I’m pretty sure Hurricane Larry deserves co-producer credits, actually.”

The trio is individually from all over the United States (New Hampshire, Pennsylvania, Montana), but were born as a band while attending Berklee College of Music in Boston, MA in 2013. They started as buskers on Newbury Street in Boston, started touring nationally, and then moved the band to Brooklyn in 2017. Max says, “Brooklyn has an endless influence on our music. Yemeni music on iPhone speakers at the deli. Reggaeton from the street side auto shop across the street rattling our window panes. West African guitar rhythms on the walk to the train. It’s insane. We love it.”

They have made notable appearances at MerleFest, Grey Fox Bluegrass Festival, Philadelphia Folk Festival, and Freshgrass Festival (where they took second place in the 2016 band competition). They are looking forward to a renewed summer of touring including the upcoming John Hartford Memorial Festival, Blissfest, and more.

Since their busking days, they’ve made two albums—Cure-All (2014) and Don’t Look Down (2019)—and released a self-titled EP in 2015. The band’s music has been praised by publications such as Bluegrass Today, PopMatters, The Boot, Saving Country Music, The Boston Globe, The Alternate Root, Folk Radio UK and more. 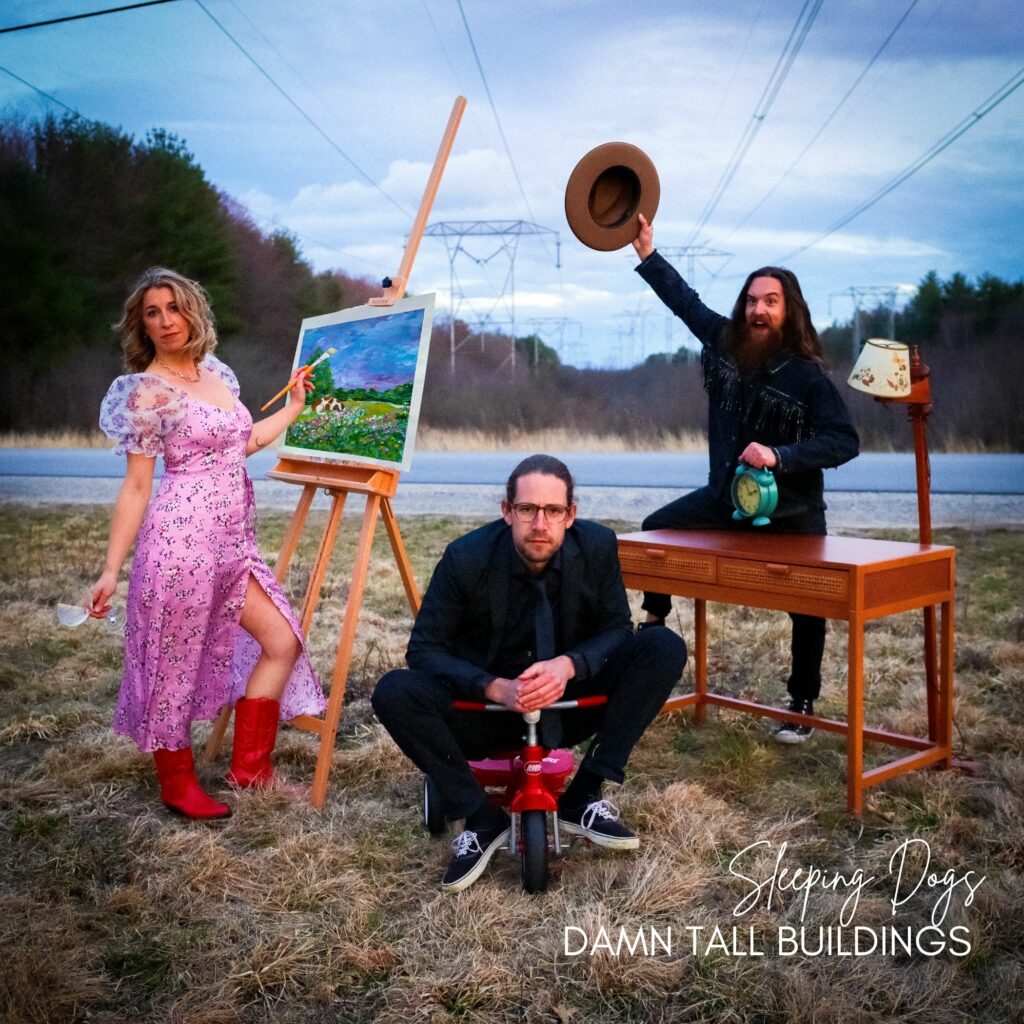 Vibrant, Rootsy, and Vivid, Sleeping Dogs is due out Sept 9

“The Carter Family for the millennial generation” —The Boston Globe