Everyone Orchestra’s conductor and founder Matt Butler has been leading a rotating cast of accomplished musicians through entirely improvised performances, since 2001. Butler’s unique style of conducting is groundbreaking in that he has essentially created an entirely new way to perform and experience music. Butler says, “Playing with different musicians, improvising every night, and getting the crowd involved in ways that they can’t be at a regular show has provided an unparalleled live music experience.”

Butler brings EO’s participants, both on stage and off, on spontaneous compositional journeys with eclectic ensembles at festivals, theaters, and philanthropic events both nationally and internationally. Featuring a large contingent of hundreds of musicians, dancers, singers and community organizations who have embraced the experience of EO in single shots of musical adrenaline to the soul. It’s all in the moment, designed exclusively by everyone participating in each show.

Having marched clearly into uncharted territory, Everyone Orchestra is an avant-garde conceptual and collaborative performance which deeply encourages and requires audience interaction. Both the band and the audience start the show with a clean slate to help co-create a dynamic musical experience, with Butler receiving ideas from the audience to help set the course of action. Tuning in to Butler’s energy and pantomime, The Conductor is utilized as a pivot to the set mood of each passing jam as he communicates musical concepts using hand signs, whiteboard and assorted mime suggestions. The edge of your seat enthusiasm for what is next is the fuel behind the continuous musical experiment of Everyone Orchestra.

“I feel like it’s part of my job, and paramount, to not have too many preconceptions,” he said. “But the only preconceptions I have going in are to create a really dynamic show from beginning to end, have it have a nice arc, and that all the musicians get a chance to shine. I want to keep them challenged and engaged. It’s a playground for musicians that I’m trying to create,” says Matt in an interview withExaminer.

“[In each city] Butler will have another group with which he can create the beautiful chaos this act is known for. Simply put, there is no set list to be confined to, no certain marks to hit over the course of the night. Butler makes his way to the front of the stage, and it’s off to the races, testing the limits of his players while also showing how good music is when everything clicks in the midst of an improvised set.” writesExaminer’s Thomas Gerbasi. “At this point, Butler almost has it down to a science, at least as much as you can on a speeding car that could veer off the road at any moment.”

EO balances the challenges of live group improvisation with triumphant tension and release conduits of music which head deep into the heart filled with the aspiration of creating shared magical moments.

In 2012, Butler gathered musicians from Phish, Moe., Dave Matthews Band, and others and recorded Everyone Orchestra’s first studio album,Brooklyn Sessions [2012], which was still largely composed on the spot over the course of several days. The results range from hard-hitting grooves that take unexpected twists and turns (“Boots”), to sweet and expansive (“Pensive”), all with a spirit that is both liberated and focused.Jambands.comwrites of the album in review, “Imagine trying to take a photograph of a flowing stream – a wild-assed, multi-colored, groove-saturated stream – and that’ll give you some idea of what capturing the music of the Everyone Orchestra in a studio setting is like. Just as the water in that stream is constantly moving and shape-shifting, never to be the same again, so is the right now music created by the Everyone Orchestra.” 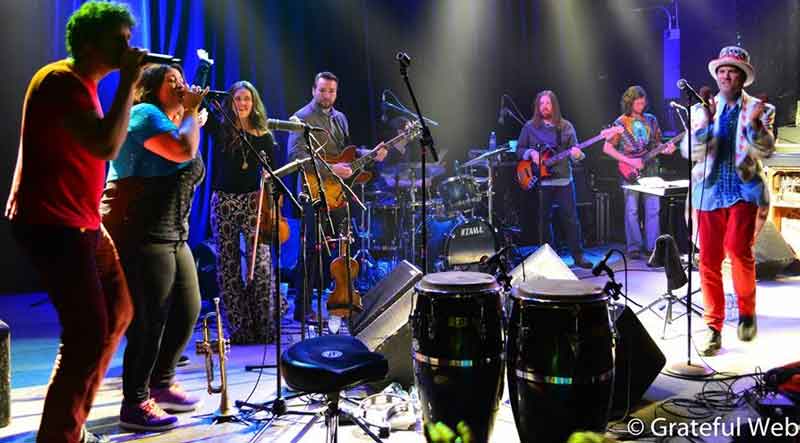 Everyone Orchestra’s conductor and founder Matt Butler has been leading a rotating cast of accomplished musicians through entirely improvised performances, since 2001. Butler’s unique style of conducting is groundbreaking in that he has essentially created an entirely new way to perform and experience music.

“With almost no rehearsal and no predetermined set list, the Everyone Orchestra is distinctly different than your neighborhood symphony or Philharmonic, it is an intensely satisfying, original and unforgettable experience for jam fans. EO not only takes participants from the ranks of the greatest bands in the land but often the leaders of those groups themselves. It is best emblematic of the cult classic, ‘Memphis Soul Stew’ by King Curtis where a musical stew is concocted by including different instrumental ingredients.” — Chadbyrne Dickens, Jambase

“His approach isn’t to tell anyone what to do – it’s to let the group improv output create settings that feed and inspire further on-the-spot explorations of rhythm and melody as the song develops. No room for egos – no room for anything except being totally engaged in the music as it’s happening, whether holding on fer chrissakes or smile, smile, smiling….” — Brian Robbins, Jambands.com

“One part fiery conductor, one part sonic ringleader, he wields a whiteboard, flying fingers, and a knowing, joyful grin. His gestures, expressions, hints, and jotted words get music flowing like electricity through a live wire, uniting musical strangers with an uncanny sense for spontaneous songcraft. He’s Matt Butler, the force behind Everyone Orchestra, an evolving project that embraces the spontaneity and openness of an all-out improv jam, and the musical athleticism and sensitivity of high-powered conducting.” — Neil Fergusen,Glide

“Matt Butler’s Everyone Orchestra is always a treat. The fully improvisational project features a rotating lineup of some of the best from all over the jam scene. Butler leads the ever-changing crew through a series of unrehearsed, completely on-the-spot compositions that range from intricate jams to silly lyrical repetitions.“ — Live For Live Music

“If you’re a music fan, period, you need to see what happens when you put world class touring musicians on a stage together, and give Matt Butler the steering wheel. The places he can take a group of musicians … is truly incredible… Butler curates a new lineup for every city, takes song name suggestions from the audience, and conducts that evening’s orchestra to produce truly unique, almost spiritual, jam moments of unison between artists and audience” — Ear Nuggets

“What makes this show different from anything else is that it represents the best of both worlds — good musicians playing at their best and the element of surprise — because even the musicians don’t know what’s next! It’s magical, pure musicianship and inspiration. Everyone Orchestra provides a platform of what’s best about music with the least amount of obstacles.” — The Ridgefield Press