For nearly two decades, Hot Buttered Rum has attracted a truly multi-generational audience across the States with their high energy and fun-loving performances that showcase their stunning instrumental and vocal ingenuity. Hot Buttered Rum is excited to independently release Lonesome Panoramic, their sixth studio album, on July 20, 2018.

“Lonesome Panoramic is the result of different thematic and stylistic threads that Butter has been chasing over the years: driving uptempo stringband tunes, layers of dark lonesome drum grooves, letting things go, and embracing what we have,” says HBR’s Nat Keefe.

Rooted in the trajectory of west coast bluegrass, Hot Buttered Rum began in San Francisco in 1999 after Keefe, Yates, and Horne connected through backcountry trip in the High Sierras; they added drums in 2008 and have since progressed into upbeat improvisational mix of song-oriented string music with a groove that interplays between bluegrass, folk, rock, and country. Their years of touring have given the band the chance to work and play with an extensive cross-section of musicians including Phil Lesh, Chris Thile, Kyle Hollingsworth, Brett Dennen, and Robert Earl Keen, to name a few, as well as being named “The Official Bluegrass Band of the San Francisco Giants.”

Self-produced, Lonesome Panoramic was recorded at Panoramic House Studio in Stinson Beach, CA, along the Panoramic Highway. With majestic views of the western Marin County coastline, it is a landmark destination studio built with recycled materials in the‘60s and renovated and upgraded into a studio in 2013. The studio has been host to several big-name indie bands, including My Morning Jacket, Band of Horses, and Thee Oh Sees. Lonesome Panoramic was engineered by Robert Cheek (Band of Horses, The Chris Robinson Brotherhood), mixed by Zebulon Bowles, and mastered by David Little.

Yates says, “Making music on the Panoramic Highway carried a lot with it for me. It’s one of the roads I grew up driving, towards the ocean, the mountain, the woods, and, eventually, back home again. I hope some of these tunes can do the same for the listener.”

Much of Hot Buttered Rum’s music is inspired by the northern California landscape which can be heard in the lyrics, felt through the music, and known from the backstory. Lonesome Panoramic conveys a broad range of what Hot Buttered Rum offers.

The album kicks off with a pair of buoyant bluegrass tunes, opening with their more traditional lineup of guitar, fiddle, banjo, bass, with Stafford forgoing the drums for mandolin. The opening track, “You Can Tell,” written by Yates while pickin’ on one of the East Bay’s many trails, has a tinge of old-tyme to it. It is followed by “Sittin’ Here Alone,” written by Keefe about the time he built himself a cabin in the woods.

They change the pace a bit on the third track, “Country Tunes & Love Songs,” adding in drums for this mid-tempo Americana rocker which was was co-written by Keefe along with Kellen and Jamie Coffis (of The Coffis Brothers), who also sing vocal harmonies with Keefe. It is one of a few songs on the album where Yates trades his banjo for the Dobro; another is “Treasure Island Blues,” which Erik thought up while sitting on the manmade island halfway between San Francisco and Oakland.

“How Short the Song” is performed as a trio with velvety string arrangements making it peaceful and reflective, just like Oakland’s Lake Merritt where Yates wrote it, while “When that Lonesome Feeling Comes” is a more lively ragtime boogie gospel.

Keefe says in a recent interview with Marin Magazine, “There are some songs I’ve been keeping in my back pocket for a long time, like ‘Leaving Dallas’ and ‘Spirits Still Come.’ They’ve been the shy kids hiding in their mother’s skirts but I’m glad they’re seeing the light of day. ‘Spirits’ is a heavy one, about my aunt passing away. I wasn’t sure I’d share it with the world but it’s feeling good to sing it out.” “Spirits” features special guests, Rainbow Girls (Erin Chapin, Caitlin Gowdey, Vanessa May) with their haunting backup vocals to Keefe’s lyrics.

Some songs on the album are more lighthearted such as “Mighty Fine” and “Never Got Married,” while songs like “Sleeping Giants” and the intricate 8-minute “The One that Everybody Knows” have a deeper, slow burn. The closing track of the album, “The Deep End” is one that is dear to the band’s heart and was co-written by Keefe and Yates along with old friends ALO’s Zach Gill and Dan “Lebo” Lebowitz (who also added electric guitar to the mix) as a theme song for a festival the two bands co-host called Camp Deep End.

With Lonesome Panoramic, Hot Buttered Rum wades the full width of the river from the shoals to the deep waters with a passionate, laid back attitude and they are thrilled to share this new album with the world. 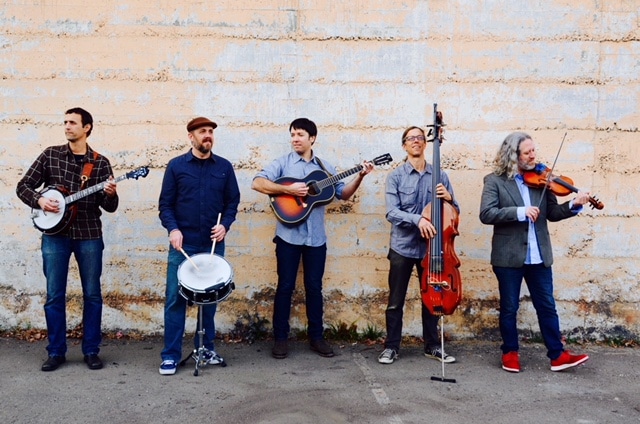