Dublin roots band I Draw Slow has been garnering praise around the globe since the release of their 2012 album Redhills. Now their latest release, White Wave Chapel (2014), is all the buzz at home and overseas with their unique sound, bringing together Irish tradition with modern Americana while staying rooted in the old-time style of Appalachia. Their impact abroad is redrawing the map for these Irish/Americana songwriters. They are happy to return Stateside this summer for a handful of shows in mid-July including Red Wing Roots Music Festival in Virginia, Tellus 360 in Lancaster, PA; Creative Alliance in Baltimore; World Cafe Live Upstairs in Philadelphia, and Grey Fox Bluegrass Festival in New York.

With the line-up of Adrian Hart on fiddle, Colin Derham on clawhammer banjo, Konrad Liddy on double bass, and siblings Dave Holden on guitar and vocals and Louise Holden on vocals, White Wave Chapel develops on the distinctive sound fans have come to love from I Draw Slow. It’s an arresting confection of old time Americana, bluegrass and Irish traditional music that swings from melancholia to joy and is always framed within well-crafted melodies and skilled performances. They offer a whole new songbook of stories with dark tales of debauchery and trouble swinging.

White Wave Chapel, engineered and mastered by veteran Irish producer Brian Masterson (Planxty, The Chieftains, Van Morrison, Christy Moore, Norah Jones), has taken the band and their unique sound to an even wider audience. The album reached No 2. in the overall Irish iTunes chart, and was selected as RTE Radio 1’s Album of the Week. It has been described as “bewitching” (Irish Independent), “exquisite” (Sunday Times), “practically begs you to sing along” (Hot Press), and “a thing of beauty” (9/10).

The UK press describes I Draw Slow as “American top league equivalents” destined “to blow the opposition away,” drawing favorable comparisons with Gillian Welch and Alison Krauss. They have played to audiences in the UK, Germany, Denmark, Belgium, performed with the legendary Béla Fleck and the Flecktones, and made an appearance at the Celtic Connections Festival in Glasgow, Scotland. The band is now in great demand in the US, touring there extensively over the last few years and have performed at several major US festivals including MerleFest, Grey Fox, Rockygrass, Pickathon, and the IBMA’s. 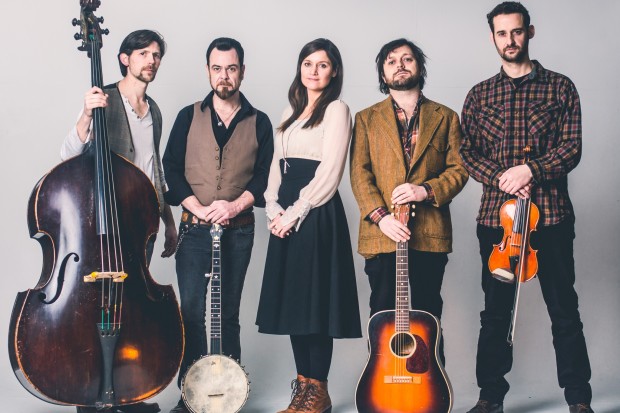 “I Draw Slow is a high-powered bluegrass band from Ireland, who discovered the genre while busking in Australia. Perfect for an all-American musical mish-mash of Appalachian Mountain music, blues, jazz and traditional country! Hear for yourself on White Wave Chapel.”– Folk Alley

“With White Wave Chapel, their best album to date under their belt, it seems a matter of time before I Draw Slow will dominate the global folk scene.” –Peter McGuire,Huffington Post UK

“For an all-acoustic group, I Draw Slow sure do have a fully realized sound. May we recommend ‘Valentine,’ ‘Grand Hotel,’ and ‘Don’t She Run.'” — The Bluegrass Situation

“It’s as gritty as it is beautiful.” — CMT Edge

“Their lyrics are evocative and imaginative, yet remarkably in an entirely American idiom and vernacular – no Gaelic transposed to fit the hills and hollers. Songs like ‘Bread & Butter’ and ‘Hide & Seek’ resonate rhythmically and lyrically…” –Sing-Out Magazine

“Their writing is skilled, rich and wonderfully mature…the album is a delight…” — KDHX