LOVE CANON brings their acoustic-roots sensibilities to the electronic-tinged pop hits of the 80s and 90s to create Cover Story, their 4th album, due out on Organic Records July 13, 2018. With Cover Story, LOVE CANON delivers a fresh set of classics, crossing genres to recount music of decades past from the likes of Peter Gabriel, Billy Joel, Depeche Mode, and Paul Simon. The self-produced album hosts a plethora of special guests, including Jerry Douglas, Aoife O’Donovan, Keller Williams, Michael Cleveland, and Eric Krasno, among others.

The band’s diehard fans are music lovers first and are drawn to the charismatic and wide-ranging vocal stylings of lead singer and guitarist Jesse Harper matched with banjo master Adam Larrabee, mandolin pickin’ by Andy Thacker, Darrell Muller holding down the low-end on standup bass, and the slick sounds of resonator guitar king Jay Starling on the Beard MA-6. It’s acoustic rock! Acclaimed fiddler Alex Hargreaves [Turtle Island Quartet, Sarah Jarosz] does all of the fiddling on this record with the exception of two tracks, and he occasionally joins the band on tour.

As seasoned virtuoso string players who have been touring the mid-Atlantic since 2010, LOVE CANON stays true to the approach, arrangements, and keen artistry of these nostalgic hits. Cover Story was engineered by Rob Evans at Dave Matthews Band’s Haunted Hollow Studio in LOVE CANON’s hometown of Charlottesville, Virginia and mixed by Wayne Pooley, Bruce Hornsby’s Engineer/Producer. Cover Story is a follow up to the band’s previous efforts, Greatest Hits Volumes 1-3.

LOVE CANON has taken many of the suggestions called out at their high-energy live shows as well as from their guest performers to offer ten invigorating tracks to bring it to the max! From the instrumental album opener, “Prelude (Angry Young Man)” by Billy Joel, to the unforgettable chorus of Howard Jones’ “Things Can Only Get Better” to the 7/4 timing of Peter Gabriel’s “Solsbury Hill / Icecaps Of Pentatonia” (with guest vocalist Mark Errelli [Lori McKenna, Paula Cole and Josh Ritter]), they run the gamut of songs from the cassette generation.

The songs in Cover Story become a vehicle for the band to demonstrate their prowess in translating the original pop production compositions into the modern day acoustic music framework to achieve a new and different, but satisfyingly similar, sonic effect. A great example of using bluegrass instrumentation to imitate the ambient electronic processed sounds is the very epic, cinematic version of Depeche Mode’s “Enjoy The Silence,” complete with a soaring string arrangement at the end by Trey Pollard of Richmond, Virginia’s Spacebomb Studios.

When LOVE CANON was first thinking of putting together a guest artist record Jerry Douglas was at the top of their list. He not only acquiesced, but proposed the great Mr. Mister tune, “Kyrie Eleison.” Mike Barnett [Ricky Skaggs and Kentucky Thunder, Bryan Sutton Band] joins in on fiddle for this track. Aoife O’Donovan seamlessly blends her beautiful vocal harmonies with Harper on Paul Simon’s “Graceland,” and, with ten International Bluegrass Music Association (IBMA) Fiddle Player of the Year awards under his belt, Michael Cleveland steps in blazing on fiddle.

Keller Williams brought “Driver 8” by R.E.M. to the band’s attention as a personal favorite; Keller wanted to do an uptempo bluegrass arrangement and LOVE CANON was envisioning a reggae/dub version, so they compromised and added the jaw-dropping classical fiddle work of Mike Barnett. Guitar hero Eric “Kraz” Krasno does a bang-up job with a fierce guitar solo on Squeeze’s “Tempted,” a song he recommended. LOVE CANON’s take on the Barry Gibb [Bee Gees] classic, “Islands In The Stream” features Lauren Balthrop [Dear Georgiana, Balthrop Alabama, The Bandana Splits], singing the tarnation out of the Dolly Parton part while Harper takes on Kenny Rogers complete with a saxophone and trumpet section at the end featuring Charlottesville Jazz legends Bobby Read and John D’earth [Bruce Hornsby and The Noisemakers].

LOVE CANON and its individual members have shared the stage and studio with many notable acts over the years including Josh Ritter, Keller Williams, The Infamous Stringdusters, KD Lang, Emmylou Harris, Sara Bareilles, Huey Lewis and The News, John C. Reilly, Madeleine Peyroux, and Colbie Caillat, among others. They were the backing band for Keb Mo and Jason Mraz at SPARC performance LIVE ART event in Richmond, and performed as the house band at the Warren Haynes Christmas Jam in Asheville a couple of years in a row with sits-ins from Bruce Hornsby and Haynes, among others. Harper and Muller were members of acoustic supergroup Old School Freight Train and they performed shows with David Grisman (who also produced one of their albums), Ricky Skaggs, and Merle Haggard. LOVE CANON has performed at various events across the country including LOCKN’, Jam Cruise, FloydFest, Bourbon and Beyond (as part of the Bluegrass Situation Stage), and Gathering of the Vibes. They have also performed overseas live on the BBC (British Broadcasting Corporation) and RTE radio (Raidió Teilifís Éirean – Irish Public-service Broadcasting).

With this adventurous chapter in their Cover Story, Love Canon proves they don’t just know music history but have a vision for where music can go.

Find out more about LOVE CANON at www.lovecanonmusic.com. 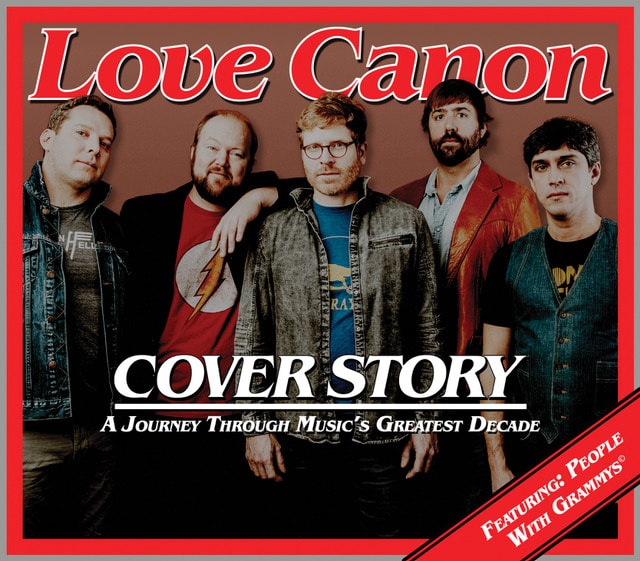 “Skilled grassers one and all, they use their considerable talents to perform pop and rock radio hits on acoustic instruments.”
– Bluegrass Today

“One of my favorite bands on any circuit today. Playing the music I love from the 80s and 90s and doing it right. I love watching and hearing these guys!!”
-Sammy Shelor