Fifteen MarchFourth musicians traveled to New Orleans and spent ten days recording at The Parlor Recording Studio, making their fourth studio album, MAGIC NUMBER, their first in over five years. With Producer Ben Ellman (Galactic) and Engineer/Producer Mikael “Count” Eldridge (DJ Shadow, Tycho, Galactic, Trombone Shorty) at the helm, this album is full of the captivating grooves and brassy swagger you have come to expect from M4, plus a healthy dose of New Orleans magic, with guest appearance by Trombone Shorty, Stanton Moore (drums), and Matt Perrine (sousaphone). The album was fan-funded through Kickstarter and will be independently released September 30, 2016.

“MAGIC NUMBER represents a shift in the band’s musical evolution, featuring more vocals and guitar than our previous records.” Founding member and band leader, John Averill, who also sings and plays electric bass says, “It is also the first record by “MarchFourth” (we officially dropped the “Marching Band” from our name).”

MarchFourth is a genre-breaking force of entertainment. This explosion of brassy funk, rock, and jazz emanates from twenty or so performers: musicians, acrobats, stilters and more, touring the country year-round, stealing the festival wherever they appear, taking audiences on a joy-inducing, booty-shaking, soul-stirring journey that defies categorization. Word on the street: You have to see it to believe it!

“From the first note to the last, the sound was pumping and the fun never stopped,” exclaimed USA Today. “It’s worth noting that there are serious musicians behind all the fun. I was a music major in college and it’s obvious these guys (and gals) have had lots of training and formal practice. Talented band geeks turned rebels. When one of the horn players steps up to improvise a solo, you know it’s going to be a treat.”

“Working with a large group of talented songwriters and musicians in M4 made the project go really smoothly. Wherever the band goes they sort of set up camp… that led to a really creative working communal environment.” Producer Ben Ellman states, “It’s always exciting to work with a band that is open to experimentation and different possibilities. MarchFourth came in wanting to expand their sonic pallet from what they’ve done previously.”

“Unlike M4’s previous albums, recorded over weeks and months in our hometown of Portland, Oregon, getting the band to NOLA for a ten-day recording session really created an intensity and electricity you can feel throughout MAGIC NUMBER.” Founding member, cymbal player, singer, and tour manager Dan Stauffer recalls, “After long days at The Parlor, the band members would go out to party on Frenchman Street and sit in on sets all over the city, meanwhile the producers, Ben and Count, would create mixes late into the night: that’s the mojo you can hear, everything going off for ten days straight.

Ellman attests, “The individual songwriters all had a clear vision of where the song should end up… there are different styles on the record, but as a whole it’s very cohesive. Very MarchFourth.” Four of the band’s members wrote the eleven songs on MAGIC NUMBER including John Averill, trombonist and singer Anthony Meade, trumpet player and singer, and project manager Paul Theodore Chandler, and electric guitarist and baritone sax Taylor Aglipay.

“The decision to work with Ben Ellman was a decision to make a modern sounding horn-driven record. This is certainly the biggest, punchiest, and rockinest M4 has ever sounded on an album. We certainly pushed the bounds of what we’re comfortable with genre-wise and performance-wise but we have a lineup of musicians right now who can handle it better than ever.” Anthony Meade says, “Putting the microscope on yourself in the recording studio is one of the most ego-shattering processes to undergo as a musician. Some people handle it better than others but we were able to get super deep in such a saturated environment.”

With a load of fresh new material, MarchFourth enters some new territories on this album, channeling some deep swampy voodoo vibes steeped in the brassy NOLA traditions. MAGIC NUMBER kicks of with the aptly named “Call to Action,” featuring the M4-style second line, calling on folks to get on up and “shake yo’ tail feathers!”

Stanton Moore makes a guest appearance on drums on the song “Push It Back” carrying the listener off on a royal litter of afro funk. Trombone Shorty blows a fiery solo on “Inventing the Wheel,” a musical journey into a heavy hypnotic groove; the track also features Ben Ellman on harmonica. Matt Perrine of Bonerama plays sousaphone on the uplifting and soul searching “Science (Free Your Mind)” which radiates all the energy of a street party in a full-on brassy explosion.

The title track’s visceral and thoughtful vocals draw you into a bombastic dream world you won’t want to leave, fusing eastern brass and the Wild West, with a little nod to Adam and the Ants. “The funky breakdown part popped into my head late one night after many Tecates. Lyrically, the song is about age, aging, the cycle of life, mortality, and coping with acceptance and resentment.” John Averill says, “I was 47 when we recorded it, and months later one of my best friends, Dave Camp (who subbed for M4 a few times on guitar) died of cancer at age 47… There’s something illusory to me about age and linear time, yet apparently each of us has a physical duration.”

“The Quarter” has more of a sexy feel, with a slinky hip-hop vibe mashing up the style of 50 Cent’s “In Da Club” with some Tower of Power or Chicago-style brass parts. Paul Theodore Chandler says of it, “Unlike the other tunes I wrote for the album, this one had been ‘road tested’ at shows for some time, but with different lyrics that were more appropriate to a live show. Wanting to rewrite the lyrics to fit the scope of this album, I set out to capture the anticipation and excitement of flying into a new city at night, being enveloped in the magic of that new place. And what better place to land than the French Quarter in New Orleans.”

Other songs on the album range from the bubbly and danceable pick-me-up “Hotstepper” with the unforgettable earworm of a hook, “Don’t tell my mom,” to the balkan brassy “Drunk Bears,” and the gypsy metal sound of “Jan Jar.” ”It’s a Trap” features the band as punk rock as a brass band can go, while “Endless Highway” speaks to timeless beauty in it’s brevity–a gentle closer to such a bold and flavorful album.

“I always feel like we are some freaky kind of Jack-in-the-box. Put twenty of us in a 45-foot bus for 6-8 hours a day, then open the door onto a stage and watch us explode!” Stauffer says, “Old greats like Basie and the Duke were some of my first favorite jazz artists in college. I love the fact that I tour and play with all these fantastic horn players and travel around in this bus. We are very much like the big bands of old, except we also have electric guitars, stilt-walkers, acrobats, and a psychedelically wide palette of musical styles and costumery.”

MarchFourth will continue to tour all over the United States in support of this album through the fall and into 2017 with their colorful stage show full of energy and groove.

Widely recognized for the allure of their live show, MarchFourth breaks ground with their music in the forefront on MAGIC NUMBER. 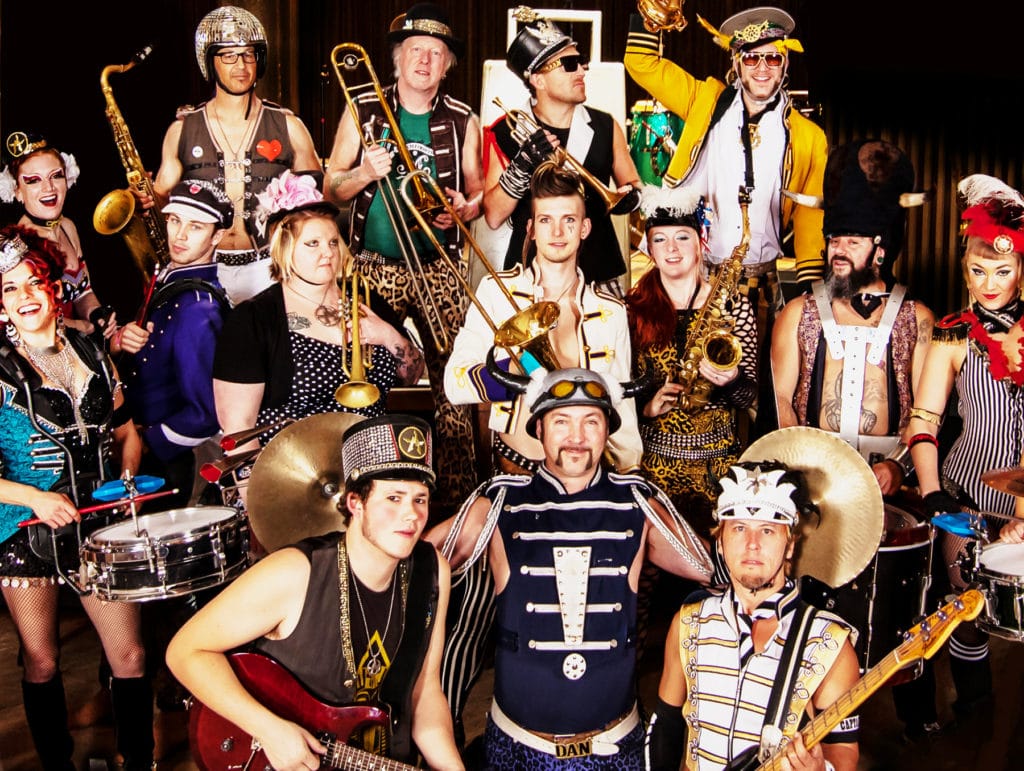