With the Feb. 1, 2019, release of Reed Foehl’s fifth solo album, Lucky Enough, fans will get a dose of powerful medicine, a cathartic collection of 10 songs that Foehl recorded with help from a mighty musical force, The Band of Heathens, at their Finishing School studio in Austin, Texas. It’s an album that will undoubtedly solidify his standing as one of the most compelling and vital Americana artists around.

Other artists have long sung the praises of Foehl. As fellow songwriter Gregory Alan Isakov notes, “Reed has the ability to transport the soul, a true master. One of the great songwriters of our time.”

Isakov co-wrote the debut track, “American Miles,” a road song that was inspired by traveling and the great american landscape. Glide Magazine premiered the song and writes, “…the vocals in the beginning immediately conjure images of staring out the window of a car as it cruises along a lonesome highway at sunrise. Foehl keeps the instrumentation sparse, letting a lightly picked acoustic and the quiet thumb of a drum create the groove while the occasional flourish of a piano and a tambourine. His vocals have a dreamy folk quality that reflects the quietly reflective lyrics.” Listen to “American Miles”→ http://bit.ly/AmericanMiles_GlidePremiere.

Todd Snider, whom Foehl will be touring with in March 2019, says, “Reed Foehl is like a brother to me. We’ve had a lot of miles on the road together, and I don’t think they make better singer-songwriters than him.”

Ed Jurdi of The Band of Heathens, a fellow native of Massachusetts, was downright poetic in his expression of admiration for Foehl, “Reed Foehl is a familiar voice in the wilderness calling you home. His songs are part New England folklore, told around an old wood stove in the midst of a winter’s blizzard and part Southern charm, warm and inviting, like the spring breeze that welcome the magnolia blossoms.”

On Lucky Enough, Foehl touches on a range of Americana styles, all with emotionally charged lyrics and can’t-get-out-of-your-head choruses, from somber folk elegies (“Stealing Starlight” and “American Miles”)  and gospel-tinged tunes (“Carousel Horses”) to barroom country singalongs (“Long Time to Make Old Friends”) and jaunty calypso-flavored, country-infused pop (“Wish I Knew”). These are deeply personal songs for Foehl, and while they were written during some dark days, there’s a sense of optimism and gratitude, an overriding feeling that the hope outshines the heartbreak.

The uncannily cinematic album takes its title from the chorus of “If It Rains,” on its surface a Dust Bowl ballad about persistence in the face of the vagaries of nature. “If it don’t shed a tear, we wait ’til next year, heartbroken but lucky enough,” Foehl sings in the unforgettably melodic chorus. With the final verse, it’s clear the song digs deeper than drought when he sings, in a voice worn and weary but warm:

“With the cold came the snow

On our favorite place to go

I carved the slated path

Just thought you should know

And built a wooden bench

Then laid it in cement

Out of love and in memory of.”

A New England native who had long lived in Colorado, Foehl was making a big move, heading to Nashville to continue his craft as an artist and a songwriter. That made sense after co-writing the leadoff song (“Fly”) with up-and-coming country singer/songwriter Brent Cobb on Lee Ann Womack’s 2014 GRAMMY nominated album, The Way I’m Livin’.

On the way, he got a call from his mother, Linda. She had lymphoma, and she needed him. He didn’t hesitate, ditching his fully loaded car in Nashville and flying straight home to Massachusetts. “It put in perspective what life’s about,” he says. “This was important, definitely more than any of these records I’ve made.”

While he cared for his mother, Foehl kept at his songwriting, thanks to the sponsorship of a longtime friend and hockey teammate. Keeping the creative flames burning was vital. “It’s not just what I do, it’s who I am. I’m writing songs so people can hear them and so I can be OK. That’s really the gist of it,” he says.

After Foehl lost his mother in July 2017, he knew he had to keep moving forward and started thinking about recording an album. Although he launched his solo career with the release of Spark in 2001, he played in bands for years, notably fronting Acoustic Junction and then as a charter member of Great American Taxi. For his fifth solo album, he thought, why not go into the studio with a full-fledged band? “With all my records. I like to take leaps and chances and want to try different things,” he says. “I said, ‘What about doing it with The Band of Heathens?’”

Foehl had toured as an opener with The Band of Heathens, and he knew and loved their tones and sound and how they worked together. And The Heathens had just opened their own studio in Austin, christening it by recording an update of the entire landmark Ray Charles album, A Message from the People. “These guys are really good,” Foehl says. “If I hire them, it’s a built in sound. They’ve been playing together forever.”

The Heathens, for their part, had really hit it off with Foehl on tour and were primed to help him make an album. “We really dug his stuff and felt like it would be a good match,” said Ed Jurdi, who co-produced Lucky Enough with Foehl and fellow Heathen Gordy Quist, with both Jurdi and Quist adding guitars and vocals on the album. “What I felt our job was, was to put him in a position where he could do his thing, just really make him comfortable. The record is about Reed and his songs, so how do we elevate that by adding what we can do? The idea as a producer is to both create a record the artist likes and making an album that the artist didn’t know they could make.”

The great thing about the Heathens, Foehl says, is they always knew when to hold back and when to let it rip, deftly embellishing the 10 songs on Lucky Enough. “They are very much chameleon-like,” Foehl said of the Heathens, “capable and talented enough to adapt and play any style of music.”

Quist even pitched in on the writing of “Wish I Knew,” helping Foehl take the song in a direction he would never have thought to go. Musically, it playfully moves along at a frisky pace, while lyrically Foehl wrestles with some of the life’s big questions:

“If the choices were just black and white

I’d a half a chance to get things right

How to make it through the dark of night

Only wish I wish I knew”

In addition to Quist and Jurdi, the other Heathens playing on the album include Trevor Nealon (keyboards), Jesse Wilson (bass guitar), and Richard Millsap, (who played drums as well as electric guitar), along with Geoff Queen on pedal steel. Lucky Enough, which will be released on Green Mountain Records, was engineered and mixed by Steve Christensen and mastered by Fred Kevorkian.

Foehl’s solo career has been bookended by loss, losing his father, Billy, in 2001 around the time Spark came out and then his mother preceding Lucky Enough, with three albums in between — 2007’s Stoned Beautiful, 2009’s Once an Ocean and 2014’s Lost in the West. Growing up in Dover, Mass., his parents were a huge influence for Foehl, filling the house with John Prine music and playing for decades together in a bluegrass/country band called The Centre Streeters. His parents encouraged him in his musical passion, regularly taking him to Boston, where he cut his teeth as a performer, busking at the Faneuil Hall Marketplace at the tender age of 11.

Lucky Enough is dedicated to the memory of Foehl’s mother — “the Queen of Everything” — and a keen sense of loss flavors the album. But there’s also a sense of hope, of forward momentum, change and a celebration of love, including not just the romantic variety but the kind a guy has for the oldest of old friends. For Foehl, creating Lucky Enough with The Band of Heathens has been a cathartic process. “If I can help myself, maybe I can help others,” he says. “You’ve got to keep moving forward. I think that’s the important thing. Live to fight another day.” 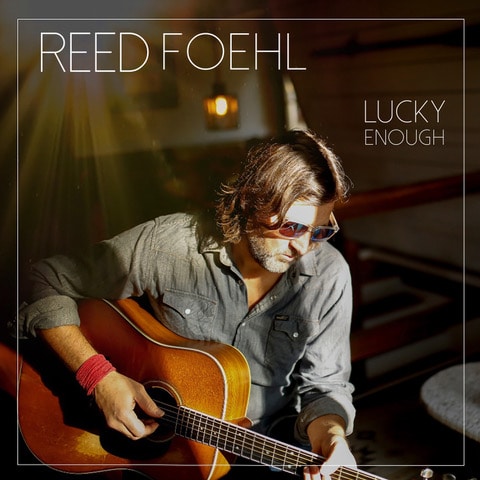 Recorded in Austin, TX with The Band of Heathens
Co-Produced by Reed Foehl with Gordy Quist and Ed Jurdi