Asheville, NC – Rudi Ekstein has been in the music business for many years as a performer, producer, and studio owner. Now, on his album Carolina Chimes: Rudi Ekstein’s All Original Bluegrass Instrumental Showcase, to be independently released October 5, Ekstein showcases his mandolin prowess on 12 original instrumental tunes featuring an all-star cast of world-class talent. Some of the artists brought into the studio for this project include multi-GRAMMY Award Winner Stuart Duncan on fiddle and renowned guitarist Jeff Autry for the entire album, two time IBMA Bass Player of the Year Mark Schatz performs on all but one tune, long-time collaborator John Plotnik plays banjo on the majority of the album and steps in on Dobro on four tracks while GRAMMY nominated multi instrumentalist, Patrick Sauber takes the lead on banjo.

Throughout bluegrass music’s 70-plus year history, albums of all-instrumental tunes have been recorded and released, showcasing the amazing level of artistry found in the genre. While singers tend to write songs that require lyrics brought to life by vocalists, instrumentalists of all stripes are prone to write tunes and melodies that let them cut loose and have some fun.

That is the case with Carolina Chimes as Ekstein has put together an upbeat collection of bluegrass barn burners performed with great pickers who help to bring these unique cuts to life. Unselfish and smart, Ekstein lets his collaborators do what they do best here. The result is a fast-paced recording that will remind you of the power of bluegrass music.

“The most obvious parts of everyone’s life have been depicted in a bluegrass song,” says Ekstein. “The bluegrass tunes I’ve written for my records over the past 30 or so years are mostly named after people, events, or something important that happened in my life. That’s just part of my love for bluegrass.”

As the son of an Austrian immigrant to America his surname, Ekstein, translates, literally, to “Cornerstone,” which is the aptly titled opening track to the album, symbolizing his heritage and love of the genre. Another song on Carolina Chimes that reflects that philosophy is “Jessy’s Fancy,” named for Ekstein’s daughter who finally noticed his mandolin playing in a different way. “My daughter Jessy heard me working out this tune in my backyard one day,” says Ekstein. “She said, ‘What’s that Dad? It’s beautiful.’ It was the first time I ever got my daughter’s attention while playing the mandolin, so this one is dedicated to her. She still loves to hear it.”

Many of the tunes on Carolina Chimes reflect Ekstein’s travels in this world, from his early years living in California and exploring the American West, to settling down in the western North Carolina mountain town of Asheville.

“Hoot Owl Hop” was written from his days of living in California when the warm summer nights brought hoot owls to the eucalyptus trees every year, which he often heard and occasionally saw. The perfect title for a wild ride of a tune, ‘Spikebuck,’ refers to the name of some rapids on the Arkansas River in Colorado where his family, barely hanging on, took a fast-moving whitewater rafting trip one year.

“Back Drag” was named after an insane stunt Ekstein once attempted for the first and last time. He says,”I was an accomplished trick rider in my youth and I tried a crazy stunt with my ankles strapped to the back of the saddle while dangling behind a galloping horse. I was nervous at first as I coaxed my horse to a full gallop. I threw myself back, with rocks flying, the wind in my ears and my head and hands now dragging within reach of the ground. After rounding the corner of the arena at full speed, my horse abruptly stopped, throwing me off to fall flat on my face in the mud.”

About a decade ago, Ekstein relocated to Asheville, where he continues to run the Foxfire Recording Studio (started in 1990), so he could play more bluegrass with western North Carolina roots musician, Billy Constable, for whom this album is dedicated. Constable, who passed away in 2015 of cancer, was best known for his three-finger-picking banjo technique and his vigorous acoustic guitar leads. A couple of songs on this project were written in his memory.

“‘Bacon in the Pan’ is my version of an old-time fiddle tune done in the bluegrass style,” says Ekstein. “It is named after my beloved friend of a lifetime and band mate Billy Constable. He often spoke endlessly on the phone about the fine points of cooking a good breakfast. ‘All Night in Kentucky’ is a tune I wrote after jamming all night long at the IBMA convention in Louisville, KY, with Billy, who was an instrumental wizard. Inspired by that experience, I just couldn’t stop pickin’ on that early morning and I spontaneously ended up playing this tune.”

Rock ‘n’ roll music and bluegrass music from the Appalachian Mountains have had a big influence in Ekstein’s musical life. Within weeks of arriving in the area, Constable introduced Ekstein to many players in the WNC pickin’ scene. Both were in the band Blue Wheel Drive, along with bassist Rob Parks, and all three went on to perform for two years with The Bobby Hicks Band. Parks makes an appearance on Carolina Chimes playing “Rockalachia,” a tune BWD performed live that is reminiscent of the boogie-woogie style of bluegrass played on the mandolin in the 1940’s by the Father of Bluegrass, Bill Monroe. Another bluegrass buddy from those days, Seth Rhinehart, also steps in on banjo on that ditty as well as “Dixie Sunset,” of which Ekstein says, “I wanted to see how close I could write a ¾-time tune within the style of bluegrass, but still make it unique in its own way. Playing music on the deck of my North Carolina mountain home while overlooking the woods and watching the sunset inspired me to write this twisty waltz.”

Other cuts on Carolina Chimes reflect Ekstein’s many musical influences. “I always thought ‘Indian Rain’ would be a good song for an old fashioned western movie. Too bad it was 60 years too late. Turned out to be a better bluegrass fiddle tune, especially with Stuart Duncan at the Helm. In the late 1980’s, I recorded my song ‘Flapjack’ while playing Dobro for a band project,” says Ekstein. “I originally wrote it on the Dobro as a tune for the mandolin. I finally made it a reality here on this album. And, that brings me to the album’s title cut, ‘Carolina Chimes.’ I’ve always loved the classic banjo tunes that featured the sound of arpeggio chimes created by banjo and mandolin duets. It reminds me of bells ringing at an old Carolina country church house.”

As producer of his own album, Ekstein had the pleasure of deciding who he would bring in to play on the project. Fortunately, he chose to collaborate with some of the best pickers in the business.

When it comes to musicians respected by music fans and professional peers alike, few receive the accolades that are routinely given to fiddler Stuart Duncan. From his work in the Nashville Bluegrass Band to his contribution to the 8-million copy selling “O Brother, Where Art Thou” movie soundtrack album, from his annual run in the all-star Telluride Bluegrass Festival House Band to his playing on countless recording sessions, and with multiple IBMA Fiddle Player of the Year Awards and also nominated for 2018, Duncan is considered one of the best fiddlers on the planet.

Guitarist Jeff Autry is also widely appreciated as a solid axe man who has played with everyone from the Ricky Skaggs to Tony Rice, Peter Rowan, and others. He also held down the guitar chair for a decade-and-a-half with the John Cowan Band. His latest gig finds him as a member of The Edgar Loudermilk Band featuring Jeff Autry.

Mark Schatz has played the bass with living legends for most of his career, anchoring historical jams with folks like Tony Rice, Sam Bush, Peter Rowan, Vassar Clements, and so many more. Currently he is the bassist for the Claire Lynch Band and is one of the best in the business and is a two time winner of IBMA Bass Player of the Year and is currently nominated 2018.

The same can be said for Patrick Sauber, a GRAMMY nominated banjo picker, who is currently kicking up the five-string for many well known national acts like Tim O’Brien, the Peter Rowan Band, John Reishmann and the Jaybirds, Laurie Lewis and the Right Hands, and others.

“Rudi’s original tunes are sure to become classics. The musicians on this project are fantastic – every tune is a gem.” –Dennis Caplinger

“Rudi has put together a nice mixture of tunes that take us from up tempo fiddle numbers to sad mountain laments with a gypsy jazz feel thrown in for good measure. I am honored to be included in this stellar lineup of world class acoustic players from around the country. This project is superbly crafted using the finest instruments, played through the finest microphones by virtuoso musicians. Great job Rudi!” –Jeff Autry

“I have known Rudi for a long time. Having lived in California for several years we used to cross paths alot. Rudi, like me, as we have grown older, seems to have a calling to write tunes. Bill Monroe did the same thing. The 12 tunes that Rudi has put together are winners. These musicians that Rudi picked to play on his project are top notch. Surrounding yourself with good musicians is the key, and Rudi, you found the right key.”  –Byron Berline 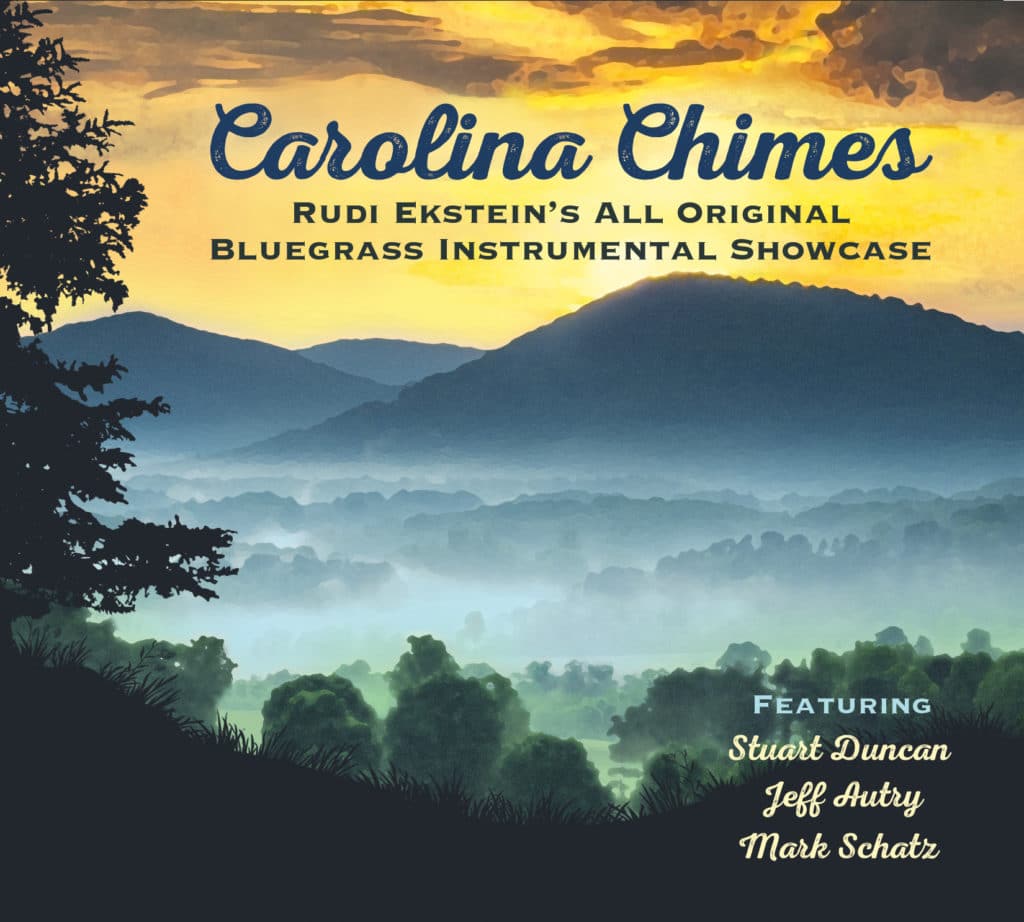