Taylor Martin brings you music with a beating heart; his raspy, emotion filled voice is instantly recognizable and his lyrics have an unflinching sincerity. Martin releases his third album, Song Dogs November 16, 2018 on Little King Records. On it, he spins tales of the highway, homes, lost love, love regained, redemption, and the overuse of cell phones. The Honeycutters’ Amanda Anne Platt took the lead as Music Producer (along with adding harmony vocals on a handful of songs) with the help of Co-Producer and Engineer, Robert George, and Martin’s visions for the album. The album was recorded at Sound Temple Studios in Asheville, North Carolina.

“Taylor Martin is a killer songwriter,” declares Platt. “He’s got a great sense of melody and an ability to write classic, accessible songs about things we all take for granted. It’s also to his credit that he hits all sides of the spectrum– there are toe tappers and tear jerkers on this album and everything in between. I’m a big fan of the saying, ‘Great songs produce themselves,’ I certainly found that to be true in working with Taylor.”

The album’s bluesy opener “Little Pictures” tips the brim to people like Professor Longhair while having a contemporary social commentary. The song is what Martin calls his, “observation of people being lost to reality and the death of empathy and the human experience. People being on cell phones too much are missing out on the beauty of the world.” It also invites the listener to put down their electronics and sink further into the experience of the album. Americana Highways premieres the official music video for “Little Pictures” and write, “The song rings instantly familiar and simplifies a complex message in clear lyrical fashion, over catchy, punchy, piano-prominent rhythms.”

A resident of Asheville, North Carolina since 2004, Martin has been creating music since 1994. He blends musical styles: the approach to music he grew up with in Richmond, Virginia; the western spirit he experienced living five years in Paradise, Utah; and the sounds of southern rock, country, and rhythm n’ blues.

The album features some of the finest, most innovative musicians in acoustic music today including, not only The Honeycutters’ Amanda Anne Platt, but also their guitarist and pedal steel player, Matthew Smith. Mountain Heart’s Aaron Ramsey (mandolin, acoustic guitar) and Josh Shilling (Piano, B3, Wurlitzer) perform on much of the album along with Jon Stickley Trio’s Lyndsay Pruett on fiddle. Drummer Richie Jones [Ralph Roddenbery, Donna Hopkins Band] and bassist Matt Dufon perform on all eleven tracks. Asheville guitar legend, Aaron “Woody” Wood, takes the lead on acoustic and electric guitars on a handful of tracks, GRAMMY winner Debrissa McKinney (Secret Agent 23 Skidoo, Empire Strikes Brass) lends harmony vocals on a song and Phil Alley adds some texture with his Telecaster on a track.

“I was supported by mostly local musicians for Song Dogs, says Martin. “Josh came in from Nashville and Richie came from Atlanta, but other than that it’s all friends from Asheville. There’s a lot of love on this record. Having close friends record with you really helps the album go deeper.”

“Working on Taylor’s albums has always been an awesome process,” says Josh Shilling.  “His distinct melodies, chord progressions, and organic recording approach create a unique and extremely vibey song and sound. His ability to pull the perfect band together makes the recording sessions feel amazing, and I love that he’s seeking emotional, human performances more than perfect performances. There’s some grit and soul on this record that feels like it came from another time and place… perhaps an Allman Brothers or Leon Russell time and place.”

“I’ve always tried to write from the heart and to do that there just has to be a story underneath,” says Martin. From the catchy “Here Comes The Flood” to the mellow and rolling “Eden Colorado” (with Wood’s expansive guitar solo and the delicate interplay of Smith’s pedal steel) to the dreamlike “Second Sight” (with it’s lucid surf tones and Pruett’s orchestral string arrangement) to the more pop-oriented “Hollywood” (featuring McKinney on harmony vocals), the album will have you hooked.

“Our Memories” is a lonesome duet that reflects on remaining in a home after the love has moved out and the remnants are left behind; Martin and Platt’s vocals intermingle with the sultry fiddle and pedal steel melodies of Pruett and Smith. Another duet with Platt, “Milk and Honey” features Aaron Ramsey on mandolin and is a love song that written over the course of many years to express that even in this numbing technological age people can still be in love in the land of milk and honey.

There are three covers on the album including Bob Dylan’s nostalgic “Sign on the Window” [New Morning], an upbeat and slightly cajun version of Neil Young’s poignant “Music Arcade” [Broken Arrow], and Merle Haggard’s song of tragic loss, “Kern River.”

The album’s title track, “Song Dogs,” lands as the final track and features Shilling on piano paired with Smith’s pedal steel. Martin says, “I spend a ridiculous amount of time in the woods alone. Usually right before dark the coyotes will begin to howl to find each other for the nights hunt. One such evening I wrote these lyrics about the loneliness of the modern age and how difficult it is to ‘stay’ when your heart is restless. And the remorse after you’ve gone too far… I sure do identify with those animals at dusk.”

“Taylor Martin is a singer-songwriter who will remind you of everything good from Tom Waits to the Everly Brothers or the Avett Brothers with some surf rock thrown in. Well-sung, well-played, well-written and relevant…” writes Asheville Citizen Times.

Asheville’s veteran songwriter is just below the forty mark with a bright future as a songwriter and performer ahead of him. Although as jaded and bitter as some road worned heroes, Martin finds refuge in a good sense of humor. “I would have been a terrible dentist,” he laughs. “I’m here, music is why, this is Earth, let’s make more music.” 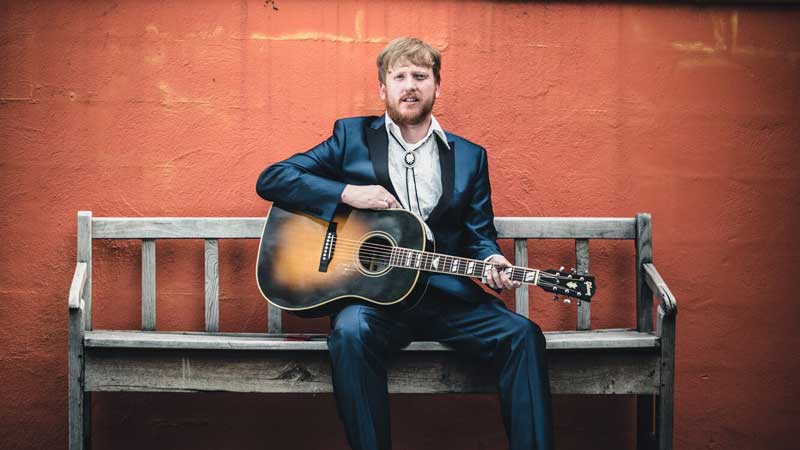