Firmly planted in Asheville NC’s thriving roots music scene, Tellico is well schooled in bluegrass but with an unbridled organic “Appalachiacana” sound, combining some of the finest voices, songs and instrumental prowess in western North Carolina and beyond. Anya and Stig’s committed, authentic vocals are alloyed with Aaron’s flowing and soaring dobro and Jed’s textured and expressive mandolin, rooted in the mountain music they grew up with while pushing tradition into a modern Americana sound aesthetic.

Storytelling is at the helm of Tellico’s music. All of the songs on Relics and Roses were penned by Hinkle and Stiglets with the exception “White Line-River of Pride,” a Neil Young and Crazy Horse medley of two dirty electric rock tunes buttoned up bluegrass-style. The leading track, “Backstep Blues” [Hinkle] has a “backstep”, a rhythmic hiccup that is typical of old time music, telling the story of a man’s successive retreat from his wife (with the refrain “hey where did your daddy go wrong?”), leaving her with the “backstep blues.” “Calamity”, written by Stiglets, is a tale of disaster sparked by a combination of Hurricane Katrina and Japan’s 2011 tsunami, and the destructive and terrifying images of those events.

“Forsaken Winds” is poetry unto itself with the ethereal sounds of Ballance’s pedal steel filling in the spirit of the lyrics; while “Hawkeye Pierce and Honeycutt Blues” is a tongue and cheek raggy romp in an Asheville street busker’s shoes. “Can’t Go Home Again” is inspired by Asheville author Thomas Wolfe’s book of the same name. Anya found the book to be so richly descriptive in Wolfe’s longwinded style, especially when the protagonist DOES go home again, which she said, “reminded me of something that my dad always used to say: ‘you can’t go home again’! Of course you can’t. The comforting idea of home is just that, an idea. You have to face yourself and your life. Running from it, either to home or far away from it, doesn’t alleviate your suffering.”

“Mexico 1995” is a coming-of-age story penned by Hinkle after a solo four month journey, mostly by bus, from Nogales, Arizona through Guatemala and back. It was before the internet, before cell phones, and after a grisly war and genocide in southern Mexico and Guatemala, a real eye opener for a kid, all during the winter after Jerry Garcia died. Hinkle says, “That early morning that I walked back, on foot, into my post-college privileged American life after crossing the border at Nogales was like a dream, I was a ghost in my own shoes, my idea of who I was as porous as the haze that seemed to linger that entire day that I re-emerged.” The song uses samples from iconic songs that set up the general feeling that it’s all been done before. Hinkle reflects, “Where does a kid go with that? What’s ahead that’s worth anything?”

Relics and Roses is the first since Anya, Stig, and Aaron formed Tellico after recording four records with the Asheville-based bluegrass band Dehlia Low, whose final album Ravens and Crows was released on the Rebel Records label in 2011.

“I love how the songs on Relics and Roses sound with these musicians covering all details that I didn’t even realize I was longing to hear. The band’s rich playing overlays absolutely perfectly with the meanings of the songs, whether playful and amusing or searching, haunting and lonely,” says Hinkle. 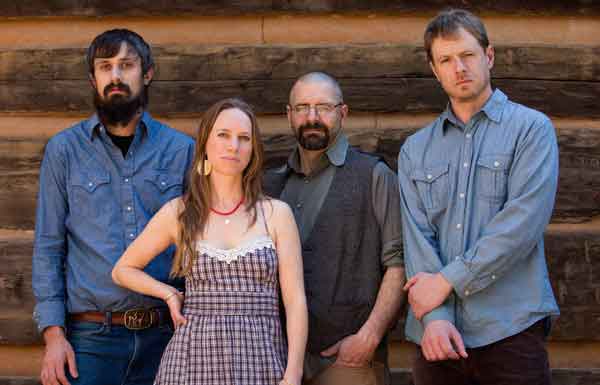 The album features the singing and songwriting of Anya Hinkle (guitar, fiddle) and Stig Stiglets (bass), and showcases Aaron Ballance on dobro and pedal and lap steel and Jed Willis on mandolin and clawhammer banjo. Guitar virtuoso Jon Stickley (Jon Stickley Trio) produced the album and makes a few guest appearances with drums and guitar.

“With deep warm tones, intimate vocals, vivid lyrics, natural arrangements, and emotional solos Tellico masterfully draws the listener into the center of their original songs. Relics and Roses paints a cinematic picture, continually stirring feelings of nostalgia. Through their wonderful musicianship they never fail to create an atmosphere that perfectly enhances their storytelling. I love this CD!” —Chad Manning of the David Grisman Bluegrass Experience

“….wonderfully original mountain music. Sometimes they sound like what Kate Wolf would sound like had she come from the Southern Appalachians – a beloved image if you ask me.” — Martin Anderson, Music Director & Morning Host WNCW-FM

“The album of mostly original songs is superbly orchestrated and delivered taking the listener on an auditory odyssey that ranges from soulful and deep to upbeat and euphoric. Anya, Aaron, Stig, and Jed have woven a tapestry that is timeless and authentic and deserving of your attention.” — Steve Johnson, Event Producer/Artist Relations Manager, Wilkesboro, NC

“Tellico picks up where Dehlia Low left off, focusing and refining their sound. Relics and Roses is… step forward in songwriting, with Anya Hinkle and Greg ‘Stig’ Stiglets crafting an acoustic soundscape of Appalachian daydreams that stack up to the works of John Hartford, Emmylou Harris and the Avett Brothers. Songs like ‘I Want To Know’ reach out and grab you immediately… a captivating album.” — Joe Kendrick, WNCW Program Director 88.7 FM