Tenth Mountain Division is built upon the long-friendship of mandolinist Winston Heuga and guitarist MJ Ouimette. The two first met and started playing music together in high school, eventually landing at the University of Colorado in Boulder together where they formed Tenth Mountain Division as an acoustic trio. Over the next few years they added drummer Tyler Gwynn and keyboardist Campbell Thomas. Soon after their debut album (Cracks in the Sky) in 2016, the band’s lineup solidified with the addition of bassist Andrew Cooney and so did their sound: a high-energy fusion of roots-inspired, Southern Rock boogie that heads into unchartered territories. This is elevated even more with all members sharing in the songwriting, vocals, and arrangements. The band is named in honor of the famed military unit the 10th Mountain Division, the WWII pioneers of mountain combat who founded Vail, CO and many other ski areas across the country.

With ten songs, including one instrumental, Butte La Rose captures the essence of Tenth Mountain Division—fun, danceable, and surprisingly thoughtful and heartfelt. Ouimette calls it, “a snapshot of TMD’s last year of touring fused with new offerings that will intrigue the ear with stylistic diversity, unified by the personality etched in each song.”

Bringing together some of the hottest horns from the area—Scott Flynn (ODESZA) on trombone, Gabriel Mervine (Lettuce, Karl Denson, The Colorado Symphony) on trumpet, and Nathan Peoples (Coral Creek) on saxophone—the results of these sessions can be heard on two of the albums stand out tracks: the album’s fiery opener “Hot Sweaty South,” and deeper into the album, with it’s classic Memphis soul vibes from the horns to the hook, “Got Too Excited.”

Synth-pop meets surf-rock in a melancholic lament about the pitfalls of heartbreak in “Sad Summer,” while the powerful and somber “Get Out of My Head,” “Burning Heart,” and the eerie final track, “Big Blue Sky” run deep and dark.

Taking a different turn and bringing forth a lighter mood are the subtly sweet “Highland Morning,” featuring special guest Elliott Peck (Midnight North) on harmony vocals; the inspiring and hopeful instrumental epic “Spring Chicken;” the slick guitar and bass rocker, “Drown You With the Bottle; and the groovin’ “Girl Like You.”

In 2019 the band traveled from coast-to-coast to play festivals like Summer Camp, WinterWonderGrass, Aiken Bluegrass Festival, ARISE, Yarmony, and Leftover Salmon’s Boogie at the Broadmoor; progressively bigger shows including the Boulder Theater, Gothic Theater, Vilar Center, and Ford Amphitheater; as well as sold out shows at their first appearances in New York City, Boston, and Chicago. They took the plunge back into the studio in early 2020, primed for spring tour, and then Covid hit.  After canceling their 2020 tour they put together a Covid-safe plan to get back into the studio to finish the album.

In a recent interview with The Colorado Sound, Gwynn says, “The pandemic was a real shock to the system for the band and us as individuals. We went from having a headlining Bluebird Theater show and a six-week tour around to the US, seeing a different city every night, to not being able to leave the house. It put a lot of things on pause for us. That being said, it wasn’t all negative. It gave us a chance to catch our breaths and look at our creative enterprise from simply the musical standpoint. With no shows at first. we could really dive into the new tunes we have been working on the last year or so. When we were able to actually record them at Silo Studios a few months ago it was clear we had evolved and grown as a band in a short time.”

The album takes you on a journey deep into the psyche of the band. Festy GoNuts says, “Each song shows a different side of the band —funky, playful, poppy, serious, acoustic, electric— but always remaining true to TMD. From start to finish, Butte La Rose tells a story and paints a picture that is a true testament to the talent, creativity, and dedication of Tenth Mountain Division.”

Butte La Rose is a follow up to 2018’s In Good Company which Live for Live Music declared was “chock full of raw rock and roll, with a savory listening experience guaranteed for all.” In September of 2020, Tenth Mountain Division released a stand alone single and animated music video music video for their single “9 to 5.” The band also created their own music and comedy webisode series, TMDtv, which they aired during the Fall of 2020.
“The experience of listening to TMDs new record, Butte La Rose, instantly takes me to a place,” says Erik Deutsch (The Chicks, Leftover Salmon, Shooter Jennings). “I feel like I’m on the bus, windows down, cruising through the south. But something’s different: there’s no time, decade, or era… the mood is simultaneously classic, modern, happy, sad, earthy, and intergalactic. TMD and Carbone have tapped into a new level of artistry and creativity that will undoubtedly lead to great things in the future.” 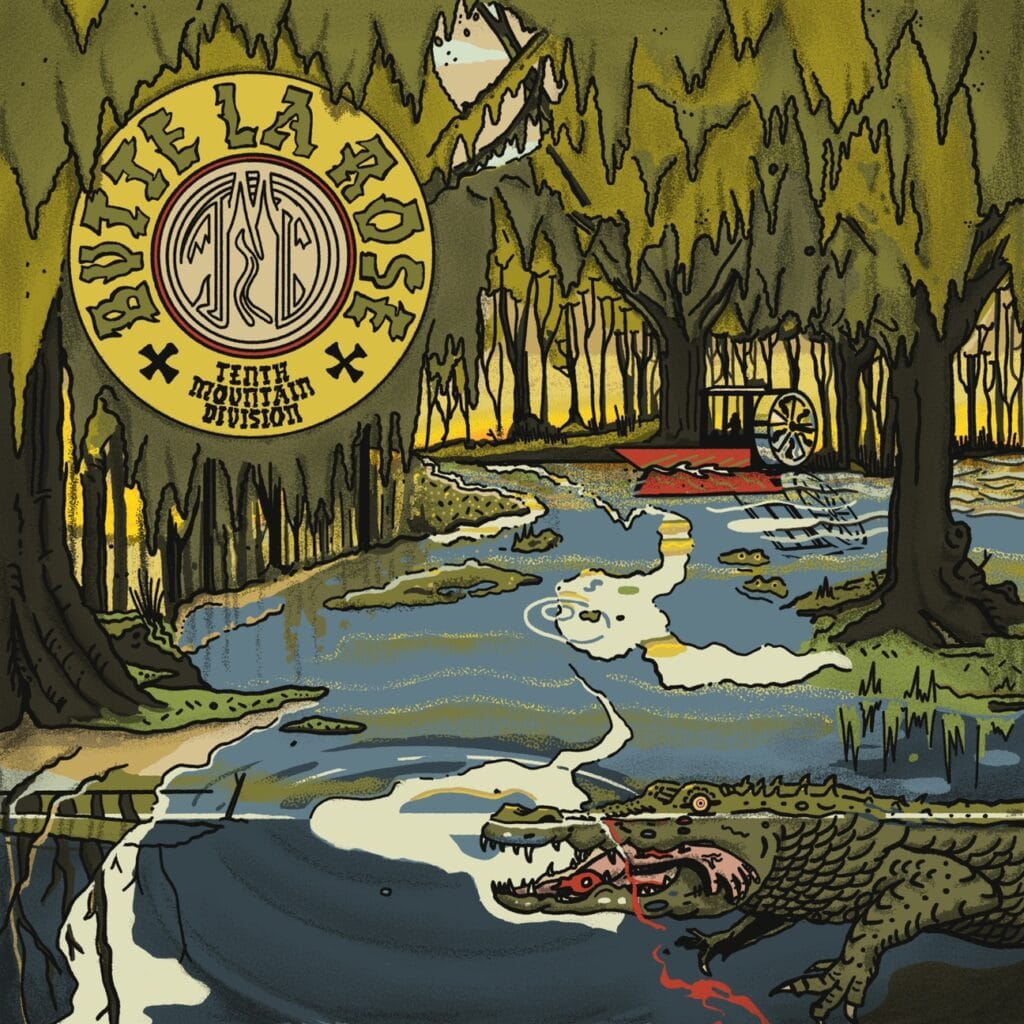