CHARLESTON,WV — The Company Stores independently releases The Family Album, their third full-length album, on September 23. The powerful and sultry voice of lead vocalist Ileana Ille captivates the audience with her ability to express raw emotion, while the band unites many influences to lay down bold grooves amidst dynamic crescendos. “This album is about family,” says Matthew Marks, the primary lyricist for the band. “It’s about understanding the triumphs, failures, tendencies, and choices of the people who came before, in order to understand how to successfully navigate where you are going.”

Based in Charleston, WV, the band blends elements of rock and roll, jazz, funk, world music, Appalachian folk, gospel, and other soulful roots music with soaring harmonies, electronic textures, strings, and horns over a solid rhythm section. Along with Ille’s vocals and Marks on guitar, The Company Stores is Michael Micucci on bass, Joseph Cevallos on violin and trumpet, Matthew Jackfert on keys, vibes, trombone, among other instruments, and John Query on drums.

The Family Album was produced by Robert Mercurio, bassist for New Orleans funk legends Galactic. The instrumentation was recorded by Julian Dreyer at Echo Mountain Recording in Asheville, NC. Mercurio stepped in as engineer to record the vocal parts at Galactic’s Number C Studio in New Orleans—including bringing in the Josh Kagler Choral Group to enhance the choruses on much of the album. The album was mixed and mastered by Mikael “Count” Eldridge [Trombone Shorty, DJ Shadow, The Revivalists].

Mercurio says, “As a producer, I feel like I saw this band grow immensely as songwriters though the process of making this album. We started working on it before the pandemic, and with their downtime they put in the work it takes to make great songs. Illy blossomed into the rock star she now is—crushing the vocals on every take. I’m very proud of the final product and had a blast working with all of them.” Along with his own band, Mercurio has production credits with an impressive list of artists including Big Freedia, Lyrics Born, and Karl Denson’s Tiny Universe.

The Company Stores had plans to hit the road hard, raise funds, and save to record their new album in 2020, then all plans got curtailed and almost all of their live shows and side jobs were canceled due to the pandemic. The songs were written during a time of personal havoc for Marks after his engagement had ended and he moved to his family farm, where he still resides, in March 2020 to help with his Grandad who was dying of lung cancer. While first there, he did a deep dive into his family history and roots lending to the content and mood of the album. They were able to start recording in mid-2021 after a year-long pause once things seemed safe for travel again.

“This album tells a story of everything being turned upside down; both personally and across the country,” says Marks. “Together we have been spending countless quarantine hours writing and the rehearsal room, growing as songwriters and musicians, and are getting excited to present what we think will be our greatest record to date.” Jackfert, who is also a freelance composer and classical music broadcaster, collaborated with Marks on the arrangements in shaping the lush orchestral soundscapes.

Ille says, “I am honored that The Company Stores chose my voice as a vehicle to express the stories in The Family Album. Each song is a collection of the people who have shaped us and the times that made us. I hope the listeners are able to connect with the musicality, storytelling, and creativity and feel at home when they listen to it.”

With keys and vibes at the front, the album opens with “Savannah,” which alternates from dark and melancholy to upbeat and happy verses. Marks says, “This song is about my best and worst day in Savannah, GA. The verse is written in present time, on a day I was on tour and just found out my engagement to my fiancé had ended. The pre-chorus and chorus is me remembering my best day, when we got engaged on vacation in Savannah, GA.”

A fiery “A New Leaf” explores negative patterns in life, with the lyrics, “Damn… what a year. Sucker punched me to the next hemisphere… And now I’m waking up thunderstruck. Right in front of God and everyone… But now…clarity… A view from the floor that I had to see myself for sure. To turn over a new leaf…”

With its rockin’ country western vibe “Ways” continues on this theme, but sees the narrator start to recognize how choices made have developed these patterns of behavior that produce similar outcomes. “These old ways ain’t the best ways, just the ones I know… Trails blazed over time in my mind are deciding where I go… Now I gotta find peace of mind, redefine my life…” “Ways” also sees special guests Walter DeBarr [Song of the Year in Minnesota 2021, William Elliot Whitmore] and Jodi Hall on backing vocals. This song is dedicated to DeBarr, known for his soulful songwriting and deep raspy voice, who sadly passed away shortly after recording with the band.

“Maria” sees someone trapped in comparisons of old relationships and incorporates Latin styles and instruments including Flamenco Guitar, Spanish Trumpet, Latin Bird Flute, Congas, Bongos, Timbales, and Talking Drum. “Old Dog” is told from two perspectives; it has a hip hop flare on the verses—the “Old Dog” who is stuck in the past, afraid of change, and fighting the future and getting old—and heavy guitars and horns on the chorus—the “Boy” who is bluntly saying “stop barking at the shadows.”

“Fathers” looks into how mistakes made can be passed down for generations, stuck in a cycle. Marks, whose father was a pastor, says, “It’s a very personal song, about my father, and his father. I am being as honest with myself and listeners as I could—baring it all.” Set in the minor key, the acoustic guitar and electric Fender Telecaster with tremolo effects along with the Spanish trumpet at the end gives this a very Ennio Morricone Spaghetti Western vibe, closing with the lyrics, “And I want to be with you, but I’m so afraid… That I’m destined to wander the paths they paved… But I’ll fight for us darling till the end of my days… Against my fathers’ blood within my veins.”

“Blue Tide” opens with an eerie, foreboding minor key, then switches to E major at the first chorus, alleviating the tension and making for a pleasant, ethereal vibe for the remainder of the song. It captures the feeling of being in the “blue tide” of staying on the surface level, being called to let yourself explore the dark depths of yourself and your partner in order to truly feel and connect. This song features

A rock opera, “There Went The Neighborhood” is about seeing the people you shared childhood dreams with deteriorate with the neighborhood you all grew up in. The progressive “American Dream Girl” sees a few time signature changes, including 7/8, 8/8, 15/16, and 6/4, and calls out, “Hey, American Dream Girl. Who are you trying to be? You’re in a dream world. Somebody else’s dream… But every filter veils a real identity.”

“Some Sunday,” composed and written by Micucci, has a R&B flavor, with a focus on bass and groove. This song is about being on the road, and wanting to make it back to your partner to share the special times you normally have.

The album’s closing track, with its southern rock gospel ambience, “Castles & Cain” is about trying to live up to your family name, and realizing that the people who you respect and even idolize had highs and lows just like everyone else. Marks, who also plays mandolin on this song, says, “When my grandad died, I thought I could never fill his shoes. That I couldn’t keep the traditions of this family alive, and continue to build on his legacy. Then I realized that I only knew of his triumphs, never his failures. Even though he raised up this family and built our home or ‘castle,’ he also had another side of him that made mistakes, bad choices, and ‘raised Cain.’”

The name “The Company Stores” is a throwback to the old coal mines of West Virginia referring to the store in Appalachian coal towns during the 19th and 20th century where workers were paid in coal money or “scrip,” leaving them with no exit from working the mines. This name not only shows the bands heritage, but also the gritty feel of their music and the meaning behind many of their songs about the struggles of the common man.

The Family Album is preceded by the 2017 release Little Lights, also recorded at Echo Mountain Studio in Asheville, and their local debut Rollin’ In in 2014. Mother Church Pew says, “The Company Stores‘ Little Lights features a fiery backdrop of musicality that begs for a festival-sized stage and a whole lot of sunshine. It’s punchy, it’s poignant, and it’s perfect” and Jammerzine says it is “filled with emotional highs and empathetic harmonies laid over an almost orchestral level of musicianship.”

The Company Stores says, “We look forward to the day when we can sing, dance, laugh, and cry with you in a room filled with music once again.” Keep an eye on their website and socials for tour dates and further news: www.thecompanystoresband.com, facebook.com/thecompanystores, twitter.com/CompanyStoresWV and instagram.com/thecompanystores. 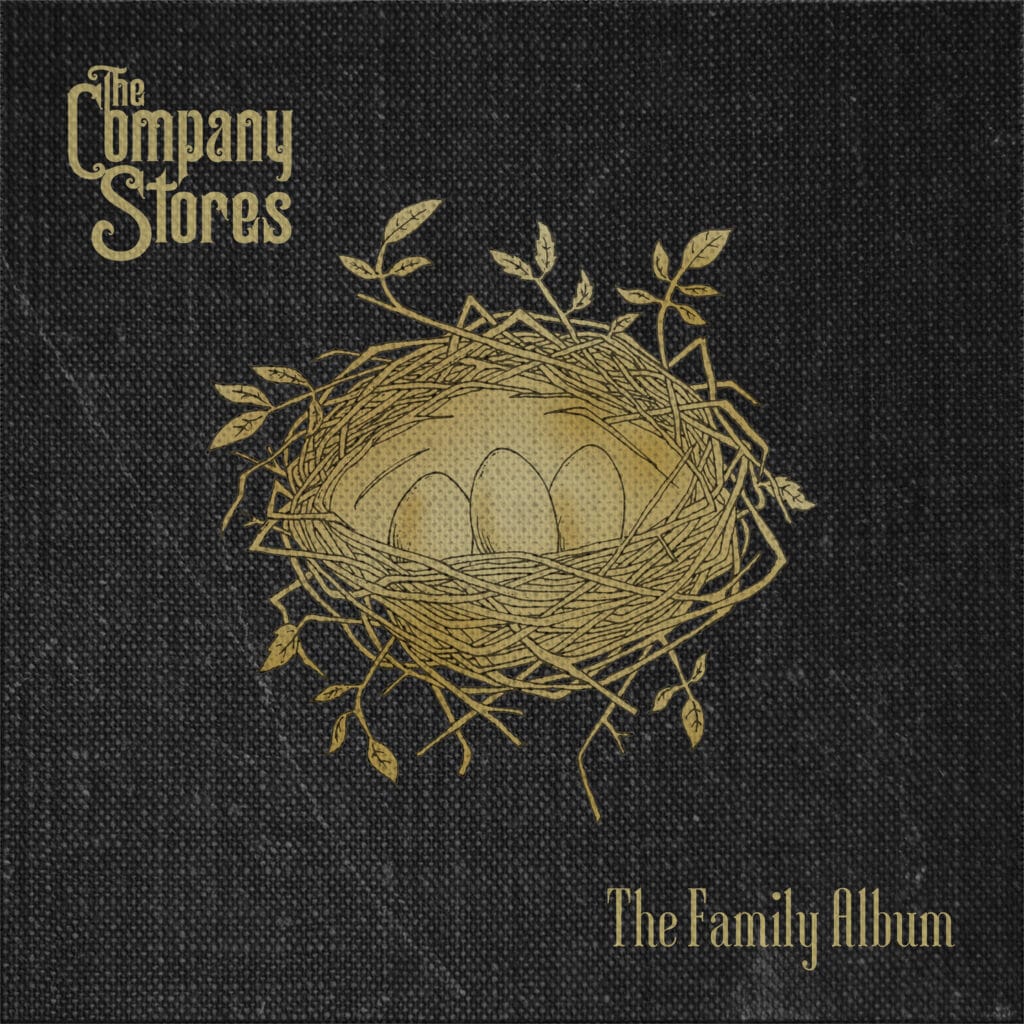 The powerful and sultry voice of lead vocalist Ileana Ille captivates the audience with her ability to express raw emotion, while the band unites many influences to lay down bold grooves amidst dynamic crescendos. “This album tells a story of everything being turned upside down; both personally and across the country,” says Matthew Marks, the primary lyricist for the band. “It’s about understanding the triumphs, failures, tendencies, and choices of the people who came before, in order to understand how to successfully navigate where you are going.”