The New Stew is a “super group” of a handful of fine musicians from all genres of music that features Corey Glover (Living Colour, Galactic) on vocals, Roosevelt Collier (The Lee Boys) on Lap Steel/ Pedal Steel, Yonrico Scott (Derek Trucks Band, Royal Southern Brotherhood) on percussion, Dave Yoke (Susan Tedeschi Band, Dr. John, Scrapomatic) on guitar, Jared Stone (Stone’s Stew) on drums, and Matt Slocum (Oteil and the Peacemakers, Col. Bruce Hampton & Aquarium Rescue Unit, The Lee Boys) on piano. This project was formed with one focused goal, to pay respect to those recordings that influenced the players and to re-imagine recordings that they feel should be heard and experienced in a live setting.

The first homage will be paid in Spring of 2016 when the group makes its debut in select cities playing the classic Bill Withers – Live At Carnegie Hall album from start to finish. It is more than a labor of love, it is a way to allow the public to experience something again or in many cases the first time and reconnect with this classic recording over four decades since it’s release. The tour kicks off in early May in Cincinnati before heading up north to Philadelphia, Annapolis, Brooklyn, and Washington, DC and then loops down south for shows in Asheville and Atlanta.

Bill Withers’ performance at Carnegie Hall on October 6, 1972, was recorded, and released as Live At Carnegie Hall in the following year. Recorded less than a year and a half since Withers quit his day job to pursue music full time, the then rising soul star commands the historic New York stage with veteran poise and power with songs like “Use Me”, “Ain’t No Sunshine”, and “Lean On Me.” In counting years as a live performer he was a novice but his ability to transform the hallowed venue to a tiny club and hold the audience’s attention like a conversation, a feat that heightens the intimacy of the performance and accentuates the intensity of the songs.  Withers’ along with his band moved fluidly, stretching out the songs beyond their initial recorded times, the subsequent jams take the audience on a ride the studio recordings were not able to do. The album ranks at number 27 on Rolling Stones’ list of the 50 Greatest Live Albums of All Time. Live At Carnegie Hall stands as one of the greatest live recordings of all time. and The New Stew is delighted to re-imagine this time-honored performance.

Meet The Players in The New Stew:

Corey Glover
Corey Glover is a singer and songwriter who is best-known for his work in Living Colour and has toured as the vocalist for the funk band Galactic. Corey is a GRAMMY Award winner for Best Hard Rock Performance (Cult of Personality) and was also named best new Best New Artist at the MTV Video Music Awards (1989). Living Colour was also included to be one of the first bands on the inaugural Lollapalooza tour in 1991. With his band Living Color, Corey has released 6 albums. Living Colour blends hard rock, soul, funk and jazz to create a unique sound that is often copied but never duplicated. Cory and his band mates have remained sonic pioneers for over 2 decades. In addition to live music, in 2006 Corey began a co-headlining a national tour of Jesus Christ Superstar, playing the role of Judas. Corey performed as Judas with the National touring company until 2008 when he returned to his band to begin work on their next record.

Roosevelt Collier
Soft-spoken by nature, south Florida-bred Roosevelt Collier does his hollering on the steel guitar. Seated front and center, the “sacred steel” front man with The Lee Boys leaves an indelible mark on listeners, flooring audiences with his lightning-fast slide work. A regular “Artist at Large” at festivals, the sit-in virtuoso has built a reputation for collaborating with some of the industry’s most respected artists of all genres, from the Allman Brothers and Umphrey’s McGee, The Del McCoury Band, and Dumpstaphunk. His new side-project, the Roosevelt Collier Trio, features Mofro drummer Anthony Cole and Shak Nasti bassist Matt Lapham — a powerhouse rhythm section, creating a filthy groove for Roosevelt’s slide to sing like James Brown and shred like Jimi Hendrix. No matter the context, when Roosevelt takes the stage, the ear-to-ear grins can’t help but be contagious.

Yonrico Scott
In 1979, Yonrico accepted an Artist in Residency assignment in Atlanta, GA, with The Neighborhood Arts Center’s Department of Cultural Affairs. He soon became one of Atlanta’s most sought-after studio drummers. Since 1995, Yonrico has been touring with the Derek Trucks Band (DTB). Since their self-titled debut CD was released in October 1997, the band has released six albums. The DTB has headlined both ‘Blues Cruise’ and ‘Jam Cruise,’ and completed multiple tours in Japan & Europe. He is also a member of the Royal Southern Brotherhood along with Cyril Neville. Throughout his musical career, Yonrico has recorded and/or performed with a Who’s Who list of well-known artists. Most recently, he has collaborated with The Ying Yang Twins and Outkast. Other notable artists include Stevie Wonder, Whitney Houston, Aretha Franklin, Ray Charles, Widespread Panic, Phil Lesh, and The Atlanta Symphony Orchestra. Yonrico’s Broadway tour performances include The Wiz, 5 Guys Named Moe, and Dream Girls.

Dave Yoke
Dave Yoke taught himself guitar in his native Anniston, Alabama drawing on the blues enthusiasm of his older siblings. He launched his career as a founding member of the long-standing, regionally popular Second Hand Jive. In the mid-90s, Yoke moved to Atlanta and became an in-demand session player, joining forces with (Clarence “Gatemouth” Brown associate) Dr. Dan Matrazzo. Yoke was then invited to become a full-time member of the oft-GRAMMY-nominated Susan Tedeschi Band and the legendary Dr. John. He is also a permanent member of Scrapomatic, with whom he tours and has recorded three albums. As testament to his blues roots, Dave is regularly invited to sit in with the Allman Brothers Band, the Tedeschi Trucks Band, and Americana artist Kristina Train.

Jared Stone
Jared Stone has done a few things. Played for country music stars, served in the USMC, drove minors across the country for merchandise %, studied music at universities, played a lot of jazz, made records, played on records, owned jazz clubs, built music venues, mended fences, promoted concerts and festivals, directed festivals and some other things that he is sure he can’t remember. He has a bad ankle from running in combat boots too long. He still plays the drums pretty good though and his band is Stone’s Stew.

Matt Slocum
Born in Newton, MA, he began his formal classical training at the age of 8, at the South Shore Conservatory of Music in Boston. At the age of 14 Matt moved to Alabama where he was accepted to the Alabama School of Fine Arts. In the summer of 1991, he attended the Berklee College of Music Performance Summer Program, and was rated among the top 10 musicians in the entire program. Matt is a keyboardist whose skills are predominantly in-demand with southern jazz, funk, fusion & blues musicians. Matt has been a member of the Oteil and the Peacemakers, Col. Bruce Hampton & Aquarium Rescue Unit, Jimmy Herring Band, Jeff Sipe Band, The Lee Boys, Susan Tedeschi band, and the Rich Robinson Band. 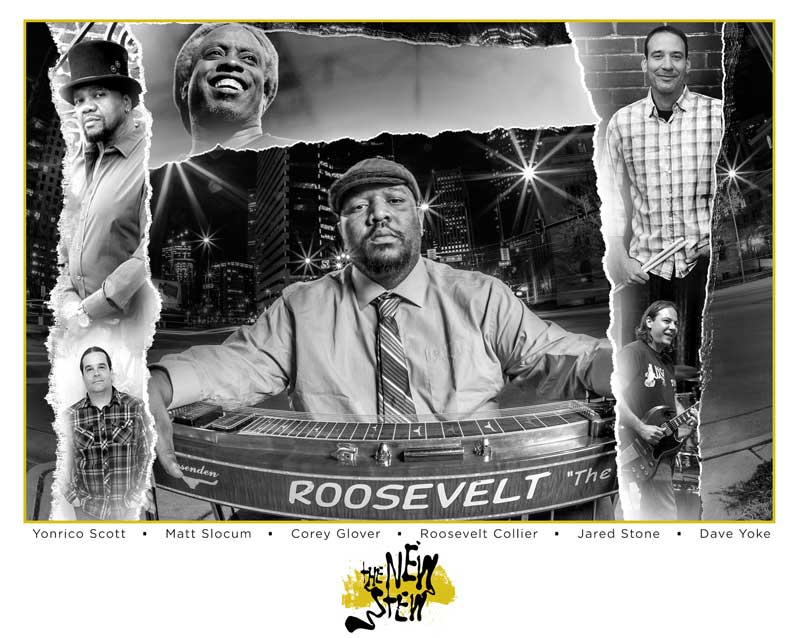