Floodwood is a progressive string band featuring the combined talents of Woodenspoon’s Jason Barady, Nick Piccininni, and Zachary Fleitz, plus moe.’s Al Schnier and Vinnie Amico. Hailing from the foothills of the Adirondack Mountains in Upstate, NY, members are veteran musicians who’ve performed on stages around the world over the last 20 years. They breathe fresh life into timeless acoustic music & play with the dexterity & chops of seasoned pros.

This past year Floodwood had notable performances at IBMA’s Wide Open Bluegrass Street Festival, late night at Capitol Theatre after Phil and Friends, Summer Camp, a tour to the midwest on the way to Shoe Fest, a variety of shows in Colorado, Upstate New York, a tour to Florida to play Suwannee Springfest and a number of other shows all along the east coast. The band is also a mainstay at moe.down where they originated on Labor Day of 2011. In January 2014, Floodwood released a live album This is Live as a follow up to 2013’s studio album,This is Life. “This is Life” was funded by a successful kickstarter campaign which raised nearly $20,000. There is talk of putting together a new studio album in 2015.

“In just about two years, we’ve played about 100 shows, made two albums, written tons of originals, launched a hugely successful Kickstarter campaign and played with some of our heroes, like Del McCoury, Keller Williams, Leftover Salmon and The Infamous Stringdusters,” guitarist Al Schnier said. “We’re just getting started.” said Al Schneir in Jan 2014 to the Summit Daily News. “With Floodwood, there are no amps and no effects. It’s like a picking party on steroids.” When asked what it’s like to have five guys from a variety of bands joining forces, Schnier said, “These guys bring everything to the table. I feel lucky to be in a band with them,” he goes on to say “These guys are the best I’ve ever played with, and the energy that Nick and Jason bring to the show keeps us all smiling and on our toes.”

Guitarist & vocalist Al Schnier and drummer Vinnie Amico not only play together inmoe., one of the premier touring bands in the country who is celebrating their 25th year as a band in 2015, but they’ve also recorded & toured as the Americana group Al & The Transamericans for over a decade before starting Floodwood. Likewise, mandolinist Jason Barady spent over ten years recording & touring with the Bluegrass group Wooden Spoon from Taos, until returning to his hometown in central, NY. Nick Piccininni is a largely self taught violinist, who learned his bluegrass chops the old fashioned way – in festival picking circles & bluegrass festivals. He’s been a professional banjo player & fiddler in high demand on the bluegrass circuit since the age of 13, and has toured w/ The Abrams Brothers, The Atkinsons, The Delaneys, & more. Bass player Zachary Fleitz is a Berklee Graduate & Hypnotic Clambake alumnus. Zach joined forces w. Wooden Spoon & has played w. J & Nick for the last few years. Al, Nick, and Jason all take lead on vocals various tunes.

According to Schnier, who spoke with SoundSpike, “the band has a batch of its own original material as well as breathing fresh life into timeless acoustic music from the Grateful Dead and Dave Grisman, to a variety of bluegrass newcomers and pioneers.” They also add in a few select unconventional covers such as a Death Cab for Cutie song called “I’ll Follow You Into the Dark” as well as covers for fans of newgrass and traditional bluegrass, these are mixed in with the bands originals which will leave you singing the words on your way home from the show. 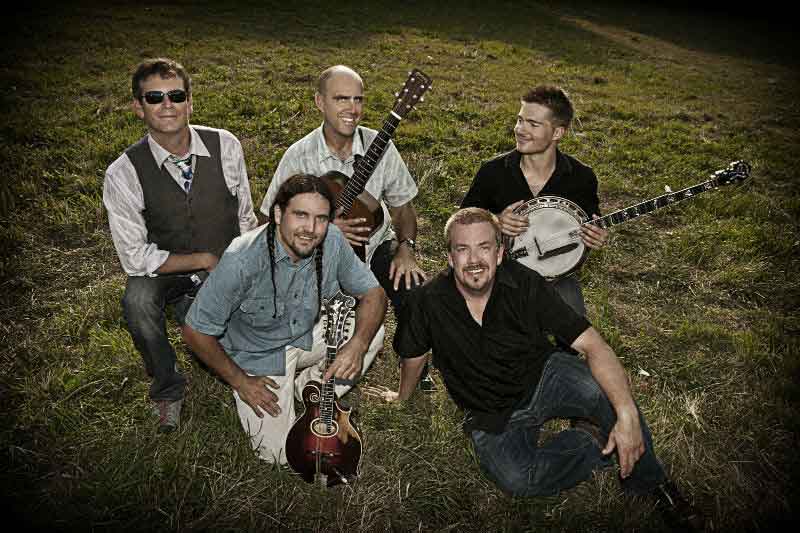 “[Floodwood] has developed a distinctive musical personality, one that adds to the ongoing development of progressive string music and has deepened the legacy of Adirondack folk.” — Buffalo News, Jeff Mier

“Al Schnier wears “jamming” well, whether with moe. or another of his projects, from Floodwood to regular appearances with the Everyone Orchestra. He’s been at it a long time – one of the jam world’s more protean players, and not always recognized as such in a scene with so many top-gun guitarists.” — Jambase, Chad Berndtson, The Art of The Sit In

“Over the past four years the band has solidified into a rollicking, good natured group, and have come to be a good time that can be counted on. As side projects go, Floodwood has long since passed the stage of being a diversion and become a force of it’s own. Old fans and new danced around the fire LONG after their bed times! But it was okay…we were at camp!” — Honest Tune, Rex Thompson, Summer Camp Music Festival review 2014

“They had a great sound and put on a fun show to make you dance and kick up some dust.” –Jamsplus, Marshall Williams

“…Floodwood isn’t just a group merely drifting along the stream. They’ve jumped into the scene feet first, plucking strings and packing energy to rise them out of the tide….This is Life is an album simple in theme, yet complex in form. Showcasing the diverse talent of the Northern-bred quintet, it draws on elements of jam, jazz, bluegrass, and roots to capture the signature sound associated with the Floodwood name.” — Upstate Live, Kayla MacLachlan, Sept 2013